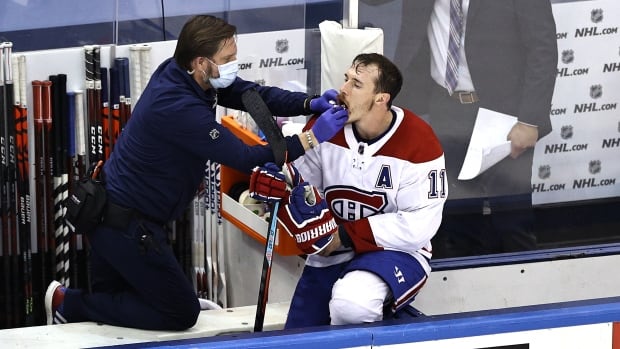 Brendan Gallagher dragged the Montreal Canadiens into the fight with their backs against the wall.

Now they’ll have to continue their battle for survival minus the heart-and-soul winger.

The Canadiens announced Thursday that Gallagher will miss the remainder of his team’s first-round playoff series against Philadelphia with a broken jaw that will require surgery after he received a vicious cross-check to the face from Matt Niskanen late in the third period of Wednesday’s chippy Game 5.

The Flyers defenceman was suspended for Friday’s Game 6 following a hearing with the NHL’s department of player safety but, unlike Gallagher, is eligible to return for a potential Game 7.

Montreal Canadiens forward Brendan Gallagher suffered a broken jaw from a cross-check by Philadelphia Flyers defenseman Matt Niskanen on Wednesday. 0:25Benched the previous night with his team getting shut out for the second time in 48 hours, Gallagher snapped a long scoring drought in Montreal’s 5-3 victory that brought the deficit in the best-of-seven series to 3-2.

The 28-year-old wasn’t made available to the media Wednesday night or Thursday morning, leading to speculation he was more seriously injured than first thought.

Gallagher, with blood dripping from his mouth, stayed on the bench following the incident, and was involved in spirited discussions with both the Flyers and on-ice officials.

The Canadiens, meanwhile, were clearly unhappy with the play. They not only forwarded in-house video of the incident from ice level to the NHL, but also posted a slow-motion version to social media.

“We’re gonna leave it with the league,” Canadiens interim head coach Kirk Muller said Thursday before the extent of the injury was revealed. “The video will show what it shows.”

Gallagher has to leave the protected bubble for the surgery, meaning he would need to quarantine for at least four days and have four consecutive negative tests for COVID-19 before being able to rejoin the team inside the secure zone. In announcing the extent of the injury, Montreal went against the league’s policy of deeming all non-participants as “unfit to play” during the pandemic.

“A cross-check right to the face,” hard-nosed Montreal blue-liner Ben Chiarot said. “An unsuspecting guy, Gally’s in the corner battling for the puck, turns around and gets a mouthful of Niskanen’s stick.”

In his daily recap, Rob Pizzo tells you what teams are heading home, and how Nick Suzuki helped the Habs “tap” home a win.  2:56

Philadelphia head coach Alain Vigneault, not surprisingly, had a different take prior to the injury and suspension announcements as the gamesmanship for both teams hit near-fever pitch.

“Gallagher got up and seemed fine,” he said of the five-foot-nine forward. “He was talking to the referees, and the whole time that he was on the bench he was talking to our players for the rest of the game. Gallagher’s a very competitive player, but I don’t think it’s [Niskanen’s] fault that he might not be as tall as some of the other guys.

“He competes as big if not bigger than anybody else. It just seemed [like] a hockey play that unfortunately cut him.”

The Canadiens won Game 5 despite playing nearly two periods without centre Jesperi Kotkaniemi after he has assessed a five-minute major and a game misconduct for boarding on Flyers defenceman Travis Sanheim, who was also left bloodied.

“For us … it was a hockey play, finishing of his check,” Muller said. “Getting the penalty and the game [misconduct], we can live with that.”

Vigneault said the temperature of the series has been turned up, including Philadelphia centre Sean Couturier blindsiding Montreal winger Artturi Lehkonen late in Game 5.

“There’s no love,” Vigneault said. “The hit on [Sanheim], it was a blow upwards towards the head that cut him.

“[Couturier], at the end of the game, sometimes boys will be boys. But [Niskanen’s] hit, his angle [of his stick] doesn’t change. It’s just a hockey play in my estimation.”

Montreal — the 24th-ranked team in the NHL’s restart — has already dealt with plenty of adversity since the league resumed its pandemic-hit season this summer.

After the Canadiens beat the heavily-favoured Pittsburgh Penguins 3-1 in the best-of-five qualifying round, head coach Claude Julien was rushed to hospital in Toronto following Montreal’s 2-1 loss in Game 1 against the Flyers last week with chest pains. The 60-year-old had a stent inserted into one of his coronary arteries, and while he’s back home resting, Julien is expected to make a full recovery.

Chiarot said the way Gallagher responded after getting benched was an inspiration for a team that fighting for its life.

“He’s been a heart-and-soul guy for this team for a long time,” Chiarot said. “He leads the way with his work ethic and how determined he is.

“If a guy like that’s going to be going that hard, everybody else better match that intensity.”

Canucks fourth-liner Tyler Motte scored the first two playoff goals of his career in Vancouver’s 4-3 victory over the St. Louis Blues in Wednesday’s Game 5 — a result that pushed the reigning Stanley Cup champions to the brink in Edmonton.

“Love to see it,” Canucks leading scorer Elias Pettersson said. “He eats pucks, he works hard, he lays hits. I was super happy for him because he deserves it.”

Vancouver defenceman Alexander Edler, who was cut by a skate on the side of his face in the second period, didn’t return for the third.

Canucks head coach Travis Green said afterwards that was a surprise, but wouldn’t say Thursday if the veteran blue-liner will be available for Game 6.

St. Louis head coach Craig Berube has yet to decide on his starting goalie for Friday.

Jordan Binnington, who backstopped the Blues to their first title last season, lost the first two games of the series. Jake Allen then won back-to-back appearances, but allowed four goals on 30 shots Wednesday.

Berube said he told his players before the series they might have to go the distance to advance.

Suzuki under fire for Hart tap

“I was just thinking, ‘I probably shouldn’t do that.’ It happened, but I wasn’t trying to be unsportsmanlike.”

When asked about the sequence Thursday, Vigneault answered in French: “Very interesting.”

Boston Bruins president Cam Neely’s team is into the second round following a five-game victory over Carolina.

The Hall of Famer said he’s been passing bubble time watching other teams play, but admitted being at Hotel X — a stone’s throw from Lake Ontario — has been tough.

“You have to find ways to keep yourself occupied,” Neely said. “You stare outside a lot. The weather’s been pretty good here and we’re close to the lake.

“So it’s a little teasing.”