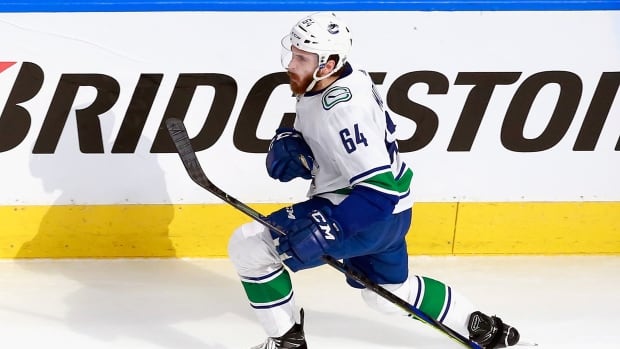 The Canucks lead the best-of-seven opening-round series 3-2 and can send the defending Stanley Cup champions packing from the post-season with a win Friday night.

J.T. Miller and Jake Virtanen, with his first career playoff goal, also scored for Vancouver, and goaltender Jacob Markstrom made 36 saves for the win.

Ryan O’Reilly, with his fourth goal of the series, Brayden Schenn, and Zach Sanford replied for the Blues.

Goaltender Jake Allen stopped 26 shots and took his first loss in three starts in the series.

Tyler Motte’s second goal of the game stood as the winner in a close 4-3 win for the Canucks who take a 3-2 series lead to game six against the Blues. 1:04

It was a tale of two games.

The Blues were up 3-1 midway through the second period, blasting away at Markstrom and compelling him to make some acrobatic saves, when the game turned on a dime and the Canucks scored three unanswered goals.

Miller cut the lead to 3-2 with a goal that was all sandpaper. He won a puck battle behind the net, came around the front and whacked away as Blues jostled and shoved him until the puck found its way under Allen and over the goal line.

Vancouver tied it when Virtanen, standing on the goal line to Allen’s right, fired a severely sharp-angle shot that bounced off Allen’s arm and in. As the seconds ticked down in the period, Motte jumped on a loose puck in the neutral zone, raced in and fired a shot low blocker side for a 4-3 lead.

Markstrom made some more point-blank saves in the third period to hold off a furious Blues charge.

Motte got Vancouver on the scoresheet while shorthanded in the first period when Blues defenceman Alex Pietrangelo broke his stick attempting a shot at the Canucks blue line. Motte jumped on the puck and raced in on Allen with a stick-less Pietrangelo eventually chasing him down, but Motte simply turned him inside out and fired a shot stick-side high and in.

After Motte’s icebreaker, it was three straight goals for St. Louis that began when Oskar Sundqvist outduelled Canuck defender Chris Tanev in the corner to deliver a picture-perfect backhand pass to Schenn barrelling down in the slot for a shot high glove-side on Markstrom.

With the seconds ticking down in the first period, O’Reilly showed off some sweet hands and slick skating, going wide around defenceman Alex Edler, swooping around the net and banking the puck in off Markstrom’s skate while defenceman Jordie Benn got caught standing and watching.

Sanford made it 3-1 on the power play, deking and juking through the right face-off circle and using Edler as a screen to rip a wrist shot high glove side on Markstrom.

Tyler Motte opened the scoring in game five between St. Louis and Vancouver with a beautiful shorthanded marker. 1:04

After that it was all Vancouver.

It was a tough game for Edler. The Swedish defenceman got injured in the waning moments of the second period when Blue Jordan Kyrou fell down and his leg flew up and his skate caught Edler on the right ear. Edler grabbed his ear, skated right off the ice and down the tunnel.

The Blues were without prolific scoring winger Vladimir Tarasenko, who has gone back to St. Louis to have his shoulder reassessed by medical staff. The Russian winger played only 10 games in the regular season before dislocating his left shoulder and undergoing surgery in October.

The Blues did get centre Ivan Barbashev back. Barbashev has not been with the team since Aug. 4, leaving to be with his family in the U.S. for the birth of their first child.