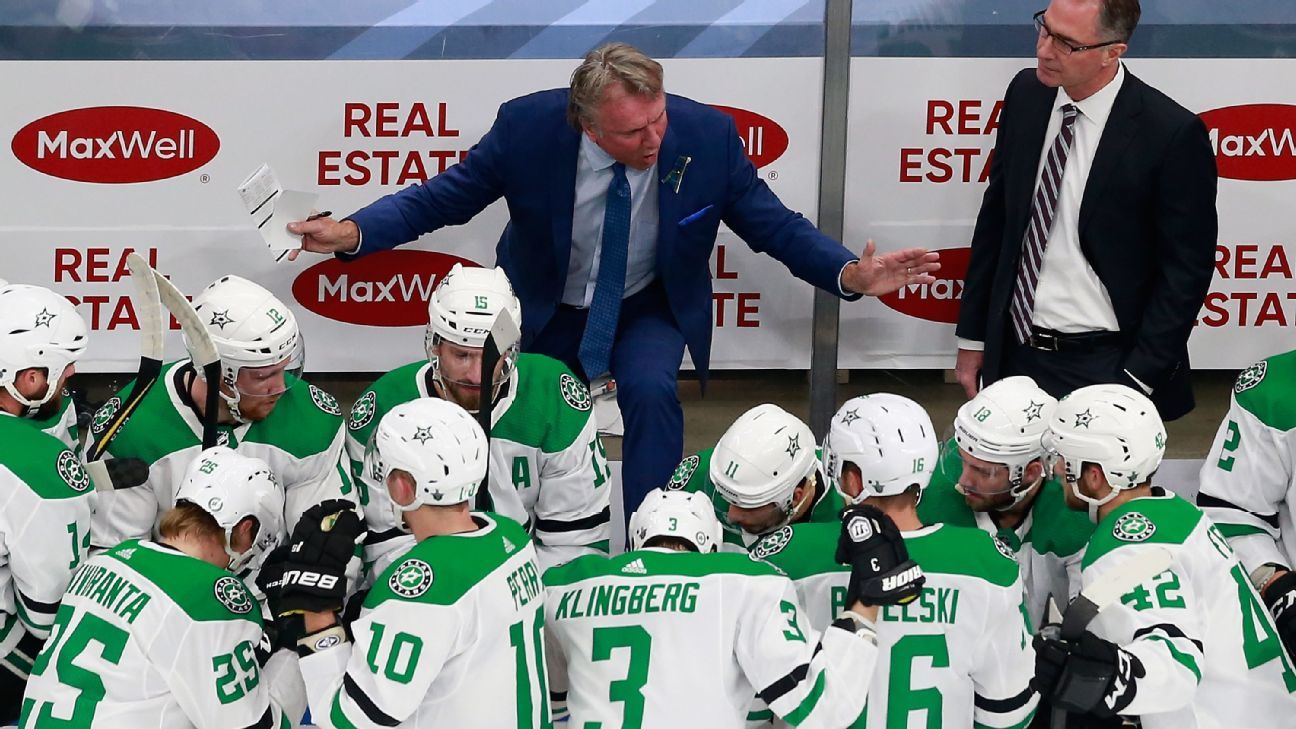 The Calgary Flames started Game 6 of their quarterfinal series against Dallas by scoring three goals before the Stars had recorded a shot. The Stars’ response was record-breaking: They scored seven consecutive goals in a 7-3 win to eliminate the Flames, marking the first time in Stanley Cup playoff history that a team trailed by three goals and then led by four in the same game.

It was one of the wildest emotional swings in a postseason tournament that has seen its share of them. Dallas coach Rick Bowness says he believes “the bubble” is to blame for that.

“It’s great that we’re playing and that we’re back. But it’s tough. That game was a mess, for both sides. It’s tough to explain, but I don’t think people understand how tough it is living in this bubble,” said Bowness, referring to the two hub cities in Edmonton and Toronto that the NHL created to restart its season during the coronavirus pandemic.

“Give the league a lot of credit. They’ve done the best job they can. Everyone is handling it as best they can. But it’s tough. This bubble living is not what you think it is. Until you’re living it day to day, you don’t understand what everyone is going through.”

Bowness said the stress of bubble life is “a little bit of everything” as this point in the postseason, which is in its fourth week.

“I can only speak for myself,” said the coach, whose team is staying in the Edmonton hub. “I’ve gone a couple of days where I haven’t even gone outside. The way we’re set up here, the hotel is connected to the rink. You walk from the hotel, you’re in a tunnel, you get to the rink, then you go back and right to your room. You’ve really gotta make a concerted effort just to get outside and get some fresh air.

That certainly applies to the Stars, who advance to the Western Conference semifinals to face the Colorado Avalanche, who eliminated the Arizona Coyotes in five games.

Their rally started with a breather. Dallas called a timeout after Rasmus Andersson scored to give Calgary a 3-0 lead just 6 minutes, 34 seconds into the game.

“The mood wasn’t good. I think everyone understood that we hadn’t played our game yet. Pucks are exploding off our sticks at that moment. We were in a hole. It was a good time to catch our breath,” Dallas center Joe Pavelski said.

The message was clear: They needed to chip away at the deficit before the end of the period. Defenseman Miro Heiskanen got one back for Dallas on the power play just over three minutes later.

In the dressing room between periods, the Stars were reenergized. “We knew that if we could score one goal, we would be on them,” center Radek Faksa said. “We showed lots of character, and then we dominated in the game.”

Rookie Denis Gurianov scored 59 seconds into the second period and then tied the score at 3-3 at 3:25 of the second when the puck deflected off of him and trickled through Calgary goalie Cam Talbot, who was pulled by coach Geoff Ward and replaced by David Rittich after that goal.

“I could feel it coming. Can’t say I blame him. I would have done the same thing if I were him. … It was a 3-0 hockey game for us,” said Talbot, who reentered the game in the third period. “I’ve been there all playoffs for us. When we needed it the most, I wasn’t there. Some of those shots are obviously savable. The onus is on me there. As much as I hated getting pulled, he had to do something.”

It didn’t make a difference. Faksa scored at 5:47, Pavelski at 7:22 and then Gurianov completed his hat trick at 15:30 of the second period. Gurianov added a fourth goal in the third period, becoming the second rookie in NHL history to record four goals in a playoff game.

“Tough first period. We just went into the locker room and forgot about it,” he said.

In the process, the Stars won a game their fans and players won’t soon forget. That includes Pavelski, playing in his 143rd Stanley Cup playoff game.

For Bowness, it was just another night of unpredictable bubble hockey.

“It’s every team. Every game I’m watching has emotional swings,” he said. “Listen, until you live what we’re going through, you have no idea what we’re going through. That’s not to be negative — it’s not. We’re dealing with it the best we can. The way we’re living, and playing, is going to lead to a lot of emotional swings. It’s not your typical playoffs. It’s just not.”