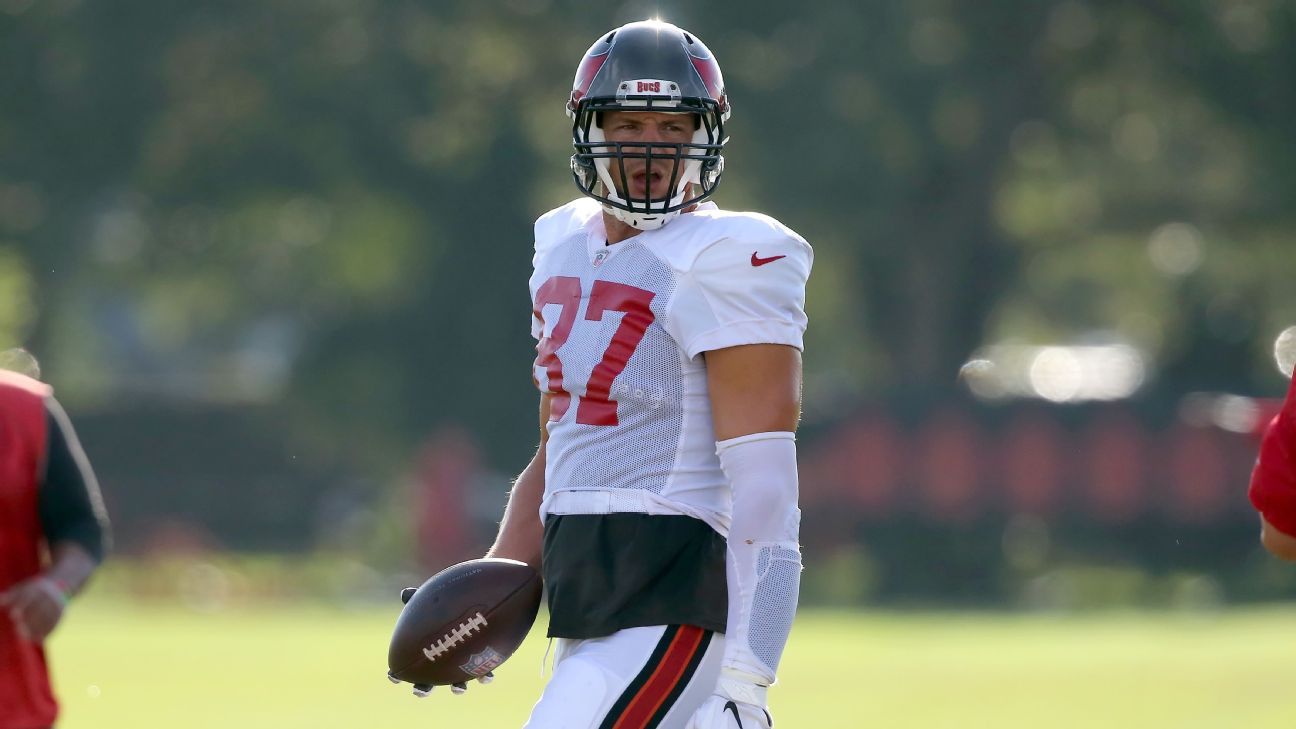 TAMPA, Fla. — Buccaneers coach Bruce Arians believes the Rob Gronkowski we’re seeing in training camp — the one Tom Brady lured out of a one-year retirement and persuaded his new team to trade for this offseason — is the same one who shattered countless NFL, Super Bowl and postseason records five and six years ago.

“The back surgeries have healed. So he had a year of healing. He looks to me like he was five or six years ago,” Arians said Thursday.

Arians did playfully jab Gronkowski for not being in “Florida shape,” saying Monday, “The heat is kicking his ass pretty good.” But he believes Gronkowski, who holds the record for most receptions and receiving yards by a tight end in Super Bowl history, along with a number of other NFL and postseason records, has regained his health and form.

“He doesn’t have a gigantic elbow brace on. He’s moving. He’s running fast again. He’s got great body control,” Arians said Thursday. “Some of the things — the stiffness that I saw at the end of his career with all the injuries — it looks like it’s gone.”

Gronkowski, who spent much of his time away from football studying recovery and nutrition, feels it too, even if there was an adjustment period, and it’s showing up in training camp. He remains Brady’s go-to target, whether it’s tossing the ball in warm-ups or during 11-on-11 team periods, where he’s been on the receiving end of a few deep Brady passes and has flashed in the red zone.

“Let me tell you, at first, the first couple practices, it definitely felt a little weird,” Gronkowski said. “The game was really fast when I first got out there again; the defense felt really fast. And as time goes on, as the days go on, I feel better about myself being out there. My confidence keeps going up; the game’s slowing down; I’m starting to pick up the offense more. But overall, it’s going good, but I’ve got so much more to work on and so much more to improve on; but I am really glad to be here, man.”

Although Gronkowski’s injury history is a concern — he suffered forearm and spinal fractures, a high ankle sprain and a torn ACL and MCL in his knee, all in 2011 — he doesn’t want to be put on a snap count. He has eagerly taken every rep in camp, although the staff said they’ll monitor his reps so he’s not too worn down.

“I’ll play the whole entire game if I have to,” Gronkowski said. “I don’t see why that would be a problem; I’ve never not played basically every snap in my career. But if it’s not the whole entire game, if they pull me out for some snaps, some rest, I’m cool with whatever the coaches’ game plan is.”

As for that other teammate — Brady — Gronk believes that after 20 years in New England, the change of teams, scenery and coaching has revived him.

“From my eyes, just looking at him, he looks refreshed; he looks ready to go, he looks ready to play every single day, and he’s motivated every day, and it’s nice to see,” Gronkowski said. “The way Tom works, it’s never gonna change; he just loves the game of football. But I can definitely say he has embraced this new challenge.”