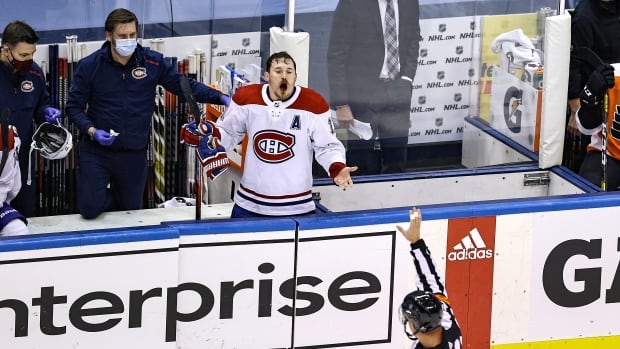 Canadiens general manager Marc Bergevin says he’s “extremely disappointed” with comments made by Philadelphia Flyers coach Alain Vigneault about a play involving Montreal winger Brendan Gallagher before it was revealed he had a broken jaw.

Bergevin says Gallagher will miss “an extended period of time and will be eating his meals out of a straw,” after he was cross-checked by Flyers defenceman Matt Niskanen in Montreal’s win in Game 5 of their playoff series Wednesday.

After the Habs confirmed Gallagher suffered a broken jaw Thursday and will be out for the rest of the series, the NHL suspended Niskanen for one game. That means the defenceman will miss Game 6 tonight in Toronto.

The Flyers lead the best-of-seven series 3-2.

Vigneault said Thursday that Gallagher “got up and seemed fine,” after the controversial hit in the third period. He defended it as a hockey play and said he didn’t think it was Niskanen’s fault that the five-foot-nine Gallagher isn’t as tall as other players.

Gallagher, with blood dripping from his mouth, stayed on the bench following the incident, and was involved in spirited discussions with both the Flyers and on-ice officials.

Bergevin says it’s sad that Gallagher will miss an extended period of time while Niskanen will be out just one game.