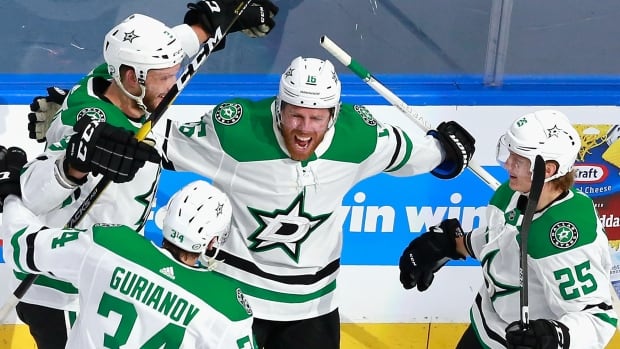 Denis Gurianov scored four times and added an assist as the Dallas Stars beat the Calgary Flames 7-3 on Thursday to advance to the second round of the NHL playoffs.

Miro Heiskanen had a goal and three assists for Dallas. Joe Pavelski and Radek Faksa also scored. Anton Khudobin made 38 saves for the win.

The Stars win the best-of-seven series 4-2 and will face the Colorado Avalanche in Round 2.

Cam Talbot, making his 10th consecutive start in net for Calgary, was pulled for David Rittich early in the second period but returned for the third period after Rittich allowed three goals on nine shots.

The Calgary Flames have been ousted from the Stanley Cup Playoffs after a big 7-3 loss that saw Dallas score seven unanswered goals, including four from Denis Gurianov. 1:04

Initially, it looked like the Flames were going to run the Stars out of Rogers Place.

Calgary outshot Dallas 15-5 in the first period and scored three times before the game was seven minutes old.

Then Heiskanen ignited the Stars comeback, delivering a blue-line slapshot through traffic past Talbot to cut the lead to 3-1.

Dallas scored five times in the second period, starting just a minute in when Gurianov jumped on a Flames turnover and fired a wrist shot from the top of the right face-off circle and in.

Then it was Gurianov again, tipping in an Esa Lindell point shot past Talbot. That prompted Calgary head coach Geoff Ward to give Talbot the hook for Rittich and see if that could spark his squad.

Rittich, who had not played in a game in six months given the hiatus due to COVID-19, struggled badly.

Faksa gave the Stars the lead on power play goalmouth scramble. Then Pavelski scored to make it 5-3 when Rittich stopped a Heiskanen point shot but couldn’t corral the rebound. It was Pavelski’s sixth goal of the post-season.

Gurianov then scored again, using Mark Giordano as a screen to wrist the puck past Rittich.

Talbot returned to the net for the third period and allowed the final goal of the Calgary season when Gurianov walked in untouched and wristed the puck past him for his sixth goal of the post-season.

Heiskanen has three goals and nine assists in the post-season, which includes three round-robin games.

The Flames were without top regular season scorer Matt Tkachuk. Tkachuk was knocked woozy on a hit in Game 2 and did not play again. He watched the game from one of the arena suites and the TV cameras caught him walking away or putting his head in his hands as his team imploded.

The Stars were without top-six forward Mattias Janmark. Janmark took a wicked Noah Hanifin slapshot off the skate early in Game 5 and had to crawl to the bench to get off the ice. He came back in that game to help out on the winning goal, but didn’t dress Thursday.

It’s the second consecutive year the Flames have been bounced in the first round of the playoffs. They lost last season to the Colorado Avalanche.

All Western Conference games are being played before empty seats at Rogers Place. The players are isolating between contests to prevent contracting COVID-19.