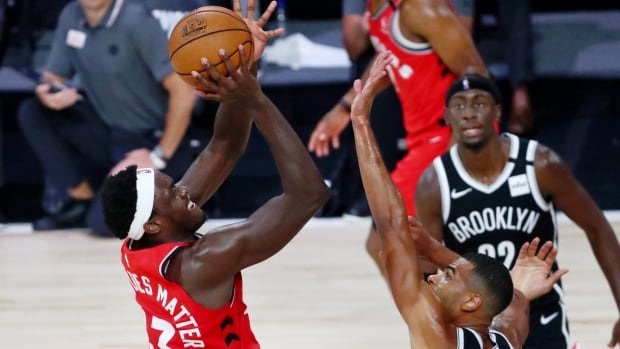 Pascal Siakam had 26 points and eight rebounds and the Toronto Raptors took a 3-0 playoff series lead for the first time in franchise history with a 117-92 victory over the Brooklyn Nets on Friday.

Fred VanVleet had 22 points, including a 52-foot buzzer-beater to end the first half. Serge Ibaka had 20 points and 13 rebounds and Kyle Lowry added 11 points, 10 rebounds and seven assists.

The Raptors can sweep the opening-round series with a victory in Game 4 on Sunday.

Tyler Johnson scored 23 points to lead the Nets, who were playing without Joe Harris — he left the NBA bubble after Game 2 for personal reasons. Caris LeVert added 15 points.

Two days after they clawed out an ugly 104-99 win in Game 2, the Raptors never trailed against the Nets. Toronto led by as many as 17 points in the first half and took a 84-68 lead into the fourth quarter.

Ibaka slashed to the hoop for a dunk early in the fourth that stretched the difference to 18 points. Lowry pounced on a bad pass on Brooklyn’s next possession, and Terence Davis finished with a jumper for a 20-point lead.

Chris Chiozza then practically tossed a pass into the hands of a prowling Lowry, who found OG Anunoby running downcourt unchallenged for a reverse dunk. The Raptors went up by 23 and it was all but game over.

Raptors coach Nick Nurse went to his bench soon after. Sharp-shooter Matt Thomas had a pull-up jumper with 2:20 left to put Toronto up by 30.

Fred VanVleet continued his hot shooting as he banked in a triple to give the Raptors a 57-42 lead at the half over the Nets. 0:35

In any other season, the Raptors would have flown to Brooklyn to play Games 3 and 4 in enemy territory. The Nets were technically the home team Friday, so 300 virtual Brooklyn fans were on the giant video screens. Otherwise, because COVID-19 forced the NBA to play out the season at Walt Disney World, home-court advantage doesn’t mean much, and Friday’s game was like Groundhog Day in playoff bubble basketball.

“I think it feels a whole lot different,” Nurse said comparing the bubble to being on the road. “It feels the same as Game 1 and 2 exactly. . . I don’t want to totally discount their home-game setup and their crowd and their fans etc., on the virtual, but I think it feels really similar to just going in and playing like the last two games were for us right now.”

Marc Gasol, who has struggled on the offensive end in this series, hit a three-pointer early in the game that gave Toronto an 11-point lead. The Raptors led 24-17 to start the second.

Ibaka finally got hot and his shot from distance midway through the second quarter stretched Toronto’s lead to 16. The Raptors would go up by 17 before LeVert hit a three-pointer with 0.8 seconds left in the half. Not to be outdone, VanVleet chucked up his shot from the logo and the Raptors took a 57-42 lead into the halftime break.

Siakam led the way with 14 points in the third, and his driving floater put the Raptors up by 17.

The Minnesota Timberwolves and Los Angeles Clippers are the only remaining teams in NBA history who’ve never had a 3-0 series lead.