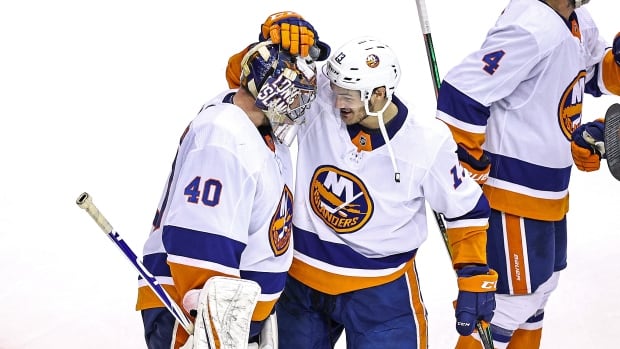 Barry Trotz went through the handshake line victorious with players on the opposite side he coached to the Stanley Cup two years ago and his former top assistant who was chosen to replace him behind the bench.

Trotz felt all kinds of emotions after his New York Islanders knocked the Washington Capitals out of the playoffs in the first round by beating them 4-0 Thursday night in Game 5. He has now advanced in the post-season two years in a row since the Capitals opted to let him leave rather than giving him a raise after he led them to a championship, while Washington hasn’t won a playoff series since Trotz’s departure.

“When you go through a series like that where you’ve had some success with a group of guys, it tears you a little bit because there’s so many good memories,” Trotz said. “But at the same time, you work for someone else and you want to beat that group just because we’re competitive, we don’t want to lose.”

The Islanders, who quickly swooped up Trotz, move on to face either the Philadelphia Flyers or Boston Bruins in the second round. They got through the Capitals with ease in Game 5 after missing a chance to sweep thanks to two goals by Anthony Beauvillier and Semyon Varlamov’s 21-save shutout of the team that drafted and developed him.

Anthony Beauvillier’s two goal performance, backed by a Semyon Varlamov shutout, was enough for the Islanders to win 4-0 and eliminate the Washington Capitals from the Stanley Cup Playoffs. 1:07

It was further evidence of Trotz’s value as a coach, and his players showed they were willing to do what he asked to give him, assistant Lane Lambert and goalie guru Mitch Korn some revenge against Washington.

“Obviously the familiarity and them winning a Cup, not just Barry — Lane, Mitch, yeah, it feels good,” forward Josh Bailey said. “It was motivation for us, too. I think you’re obviously motivated to win the series. You knew it would mean a lot to those guys.”

It’s the opposite for the Capitals, who have bowed out in the first round in each of the past two playoffs under replacement Todd Reirden, who said his job security now being in question is part of the role.

“For whatever reason, our team wasn’t able to mentally and physically get to our game for long enough,” Reirden said. “This is not acceptable for our organization.”

The Capitals erased a two-goal deficit in Game 4 Tuesday to avoid a sweep but didn’t have the same response in their second consecutive elimination game. Goaltender Braden Holtby didn’t get much help in allowing two goals on 15 shots.

While Trotz and Reirden exchanged a very quick handshake, Holtby and his former coach had a good chat on the ice after what could be the 30-year-old’s final game with Washington.

“We had a lot of success when he was here: a guy that I know myself I have a ton of respect for,” Holtby said. “He’s an honest guy. You just wish him the best because he’s one of the good guys in hockey.”

Beauvillier scored on the power play midway through the first period and then at even strength in the second, taking a big hit into the net from Tom Wilson while finishing his second goal of the game. Wilson’s Capitals teammates were unable to muster much in the way of pushback even with top centre Nicklas Backstrom back after going into concussion protocol and missing the past three games.

“I’m glad that I was back at least, but tough results,” Backstrom said.

Empty-netters by Nick Leddy and and Josh Bailey sealed it for New York, which didn’t miss a beat without injured alternate captain Cal Clutterbuck.

“I think they play an outstanding game,” Capitals captain Alex Ovechkin said. “There’s nothing you can do right now but move on.”