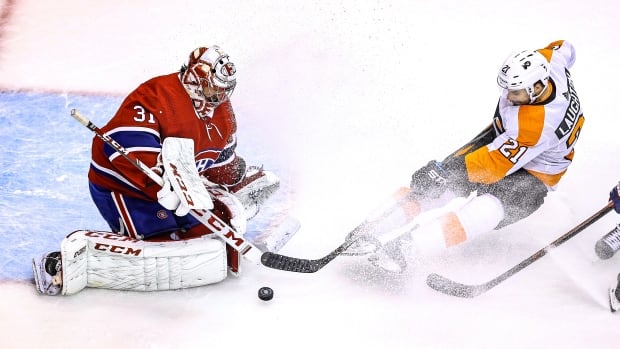 Minus both their head coach and inspirational leader, the Montreal Canadiens fought tooth and nail to extend their season Friday.

Some unlucky breaks — the story for much of the series, really — and an opponent that did just enough eventually sent them packing.

But there’s lots to be proud of for a group many didn’t even think belonged in the NHL’s restart.

Kevin Hayes had a goal and an assist, Carter Hart made 31 saves, and the Philadelphia Flyers beat the Canadiens 3-2 on Friday to win their first-round playoff matchup 4-2.

“Everybody doubted us as soon as they announced what the format would be,” said Montreal captain Shea Weber, whose team was the 24th and final club included in the resumption to the pandemic-delayed campaign. “Everyone just axed us off.

“It just shows that maybe we’re closer than people think.”

The Canadiens were without heart-and-soul winger Brendan Gallagher after he sustained a broken jaw from a Matt Niskanen cross-check late in Montreal’s victory Wednesday. The Flyers defenceman was suspended one game by the NHL, but will be available when Philadelphia opens the second round against the New York Islanders inside the fan-less Scotiabank Arena.

Gallagher’s absence was just the latest twist for the Canadiens, who beat the heavily-favoured Pittsburgh Penguins 3-1 in the best-of-five qualifying round before head coach Claude Julien was rushed to hospital in Toronto following Game 1 against the Flyers with chest pains. The 60-year-old had a stent inserted into one of his coronary arteries, but is back home and expected to make a full recovery.

“It’s tough to replace a guy like Gally,” Weber said. “You just can’t really do it. Everybody stepped up. The commitment was there, the effort was there.

“They were just fortunate to get a couple bounces early and we just couldn’t seem to find our break.”

Ivan Provorov and Michael Raffl also scored for Philadelphia, which advanced to the second round of the post-season for the first time since 2012.

“Getting into the playoffs in the NHL is not easy,” Flyers head coach Alain Vigneault said. “Once you’re in, I believe every team has a legitimate chance at winning.”

Nick Suzuki had both goals for Montreal, while Jonathan Drouin and Joel Armia had two assists each. An unlucky Carey Price — two Philadelphia goals went in off teammates for the second straight game, while the winner hit the post and struck the netminder’s leg before trickling over the line — made 14 stops in taking the loss.

In all, seven of Philadelphia’s 11 goals in the series hit Montreal players before entering the Canadiens’ net.

“Those are the breaks you get in a winning, championship season,” Price said. “You see it every year. Unfortunately, it didn’t go our way. Those are the things you can’t control.”

Suzuki, 21, and Jesperi Kotkaniemi, 20, led a Canadiens youth movement that bodes well for the future as both players finished with four goals in 10 games.

“A lot of guys stepped up to the plate and played very well in a tough situation against two very good teams,” said the 33-year-old Price. “Very proud of those kids for playing the way they did.”

“They were big, big parts for us here,” added Weber, 35. “They surprised a lot of people.”

Raffl’s goal — one he didn’t know a whole lot about — was the difference through 40 minutes as the Flyers carried a 3-2 lead even though the Canadiens held a decided territorial advantage.

Montreal had more difficulty generating chances in the third, but Tomas Tatar hit the knob of Hart’s stick with 6:49 left in regulation on a great opportunity from in tight.

Paul Byron had another chance on Hart’s doorstep with 2:31 remaining as the Canadiens pressed, but he couldn’t find a way through.

Montreal fought until the final buzzer with Price on the bench, but the Flyers held on to advance.

“It’s a great experience here,” said Suzuki, who also had three assists in the post-season. “Definitely would have loved to keep playing.

“We’re happy with the effort, just not the result.”

Hart, who grew up idolizing Price, shared a moment with his childhood hero in the handshake line.

“A real special moment,” said the 22-year-old. “That’s something I won’t forget.”

Down 2-1 after the first despite carrying the majority of the play, Montreal fell behind by two for the second time at 4:28 of the middle period when Travis Sanheim’s shot glanced off Raffle, hit the post and bounced off Price’s leg and in his for the winger’s third.

The Canadiens responded 1:39 later when Drouin beat a Flyers defender to the puck, took it hard out of the corner and fed Suzuki, who beat Hart for his fourth.

Montreal dominated proceedings from there, holding Philadelphia to one shot for most of the period.

All but eliminated from playoff contention when the schedule was suspended in mid-March because of COVID-19, the Canadiens fell behind 28 seconds into the first when Provorov’s innocent-looking effort hit Weber and sailed past Price on the game’s first shot.

Montreal responded with a couple of good shifts, but shortly after killing a Philadelphia power play, Price was once again victimized by some more bad luck when Hayes fired a shot that ricocheted off Artturi Lehkonen’s stick and in at 5:23.

The Canadiens responded on a man advantage of their own at 10:03 when Suzuki grabbed a loose puck in the slot and sifted a shot through Hart for the rookie’s third — a first indication the underdogs were planning to stay in the fight.

“They committed to playing hard and playing for each other,” Montreal interim head coach Kirk Muller said. “Let’s be honest, we surprised people. The experience of what all these guys learned … this has really gelled this group together.

“This is a great thing for these guys to build on.”