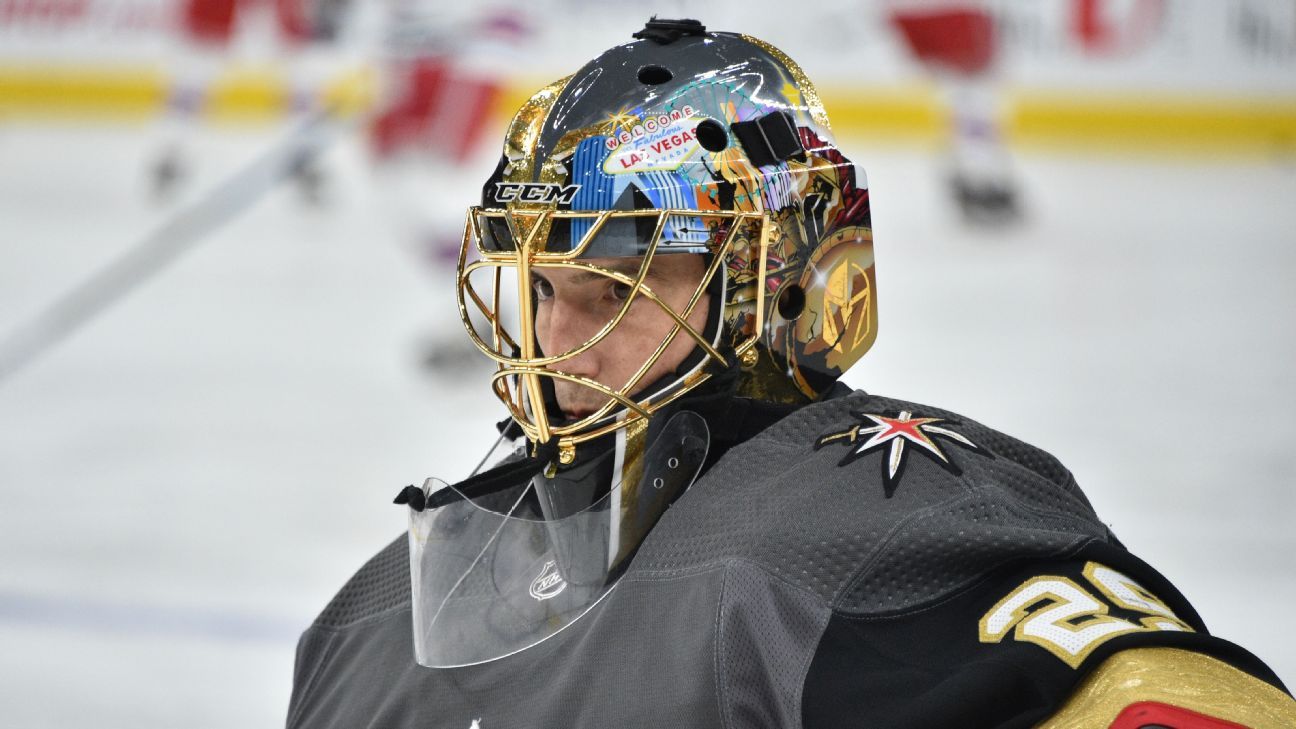 Peter DeBoer didn’t name his starting goaltender for Game 1 of the Vegas Golden Knights‘ second-round series against the Vancouver Canucks.

A tweet Saturday by Marc-Andre Fleury‘s agent might, however, have given that information away, and it certainly stirred up questions in the middle of the playoffs.

Agent Allan Walsh posted to Twitter an illustration of Fleury in full uniform in net being impaled by a sword with “DeBoer” on it.

DeBoer has said that it’s “a great luxury” to have two starting goalies and that he would figure out how to rotate them. Robin Lehner has gotten the majority of the action, going 5-1 with a 2.04 goals-against average and .904 save percentage. Fleury is 2-0 with a 2.50 GAA and .886 save percentage.

Judging by the sentiment of Walsh’s tweet, Lehner could be in net Sunday in the Vegas-Vancouver series opener (10:30 p.m. EDT, NBC Sports Network).

Fleury is 12-2-2 against the Canucks and hasn’t lost to the team since 2006. Speaking Friday before the Golden Knights knew if the Canucks or St. Louis Blues would be their opponent — but not asked directly about Fleury — DeBoer said, “I don’t think it probably changes our roster decisions or our line makeups, at least not for Game 1.”

A team spokesman confirmed Saturday that the Golden Knights are aware of Walsh’s tweet. Walsh did not respond to a message seeking comment.

Fleury won the Stanley Cup three times with Pittsburgh — twice as part of a tandem with Matt Murray — and led Vegas to the 2018 Stanley Cup Final. The 35-year-old was the starter until the Golden Knights traded for Lehner at the deadline in February.

General manager Kelly McCrimmon said the team spoke with Fleury the day of the trade and with Lehner upon his arrival to reassure the two of them about the arrangement.

“We did not feel that we had enough support behind Marc-Andre, so that was the motivation behind the deal,” McCrimmon said recently. “I think there’s a good relationship between both goaltenders, and each is available for the same reason: to try to help us win.”

Fleury remains with the Western Conference’s top-seeded Golden Knights in the Edmonton, Alberta, bubble. Games 5 and 6 of this series, if necessary, are scheduled on back-to-back days and could lend themselves to the goalies’ splitting the duties in net.

That won’t happen for Vancouver, which has ridden Jacob Markstrom to seven wins in 10 games. The 30-year-old Swede has been among the best goalies in the playoffs, with a .929 save percentage.

“He’s a great example of, one, how long it takes goaltenders to develop and how quickly people can give up on guys,” said DeBoer, who coached the Florida Panthers when they drafted Markstrom in 2008 and when Markstrom played his first NHL games a few years later. “The fact that he’s persevered and turned himself into one of the best goaltenders in the world and how long it took for him to do that, I give a ton of credit to him because that path hasn’t been easy.”