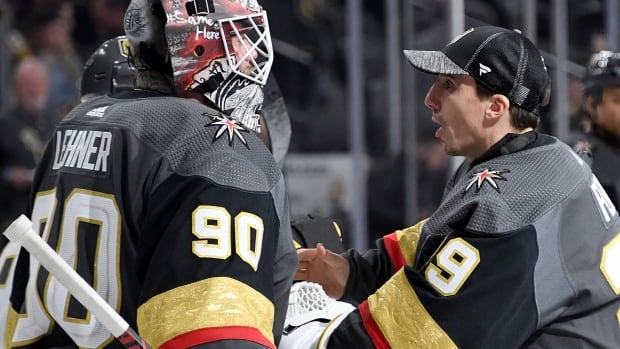 Vegas Golden Knights goaltender Marc-Andre Fleury didn’t take too kindly to his agent posting a photo on Twitter of his client being stabbed in the back by a sword engraved with coach Peter DeBoer’s name.

Fleury, 35, confirmed on Sunday afternoon that he asked agent Allan Walsh to delete the tweet.

“Regarding that picture that came up, Allan’s been my agent for a long time. I’ve known him since I was 15. We’re always very close,” Fleury said. “We always talk about hockey or other things in life. He always protects and cares a lot about his players, and cares a lot about me also. I really appreciate his passion for the game. I think this was maybe a way to defend me in this situation.”

Fleury met with DeBoer and Vegas general manager Kelly McCrimmon on Saturday after the image was published.

“It was good to talk, see where we’re at,” Fleury said. “I don’t like being a distraction for my team.”

‘We all want to win’

Fleury, a three-time Stanley Cup-winning goaltender with the Pittsburgh Penguins, has played second fiddle to Robin Lehner since play resumed in August. Fleury is 2-0-0 with a 2.50 goals-against average and .886 save percentage while Lehner, who was acquired at the NHL’s trade deadline earlier this year, sports a 5-1-0 mark with a 2.44 GAA and .904 save percentage.

DeBoer has yet to announce his starting goaltender for Sunday night’s opener of the best-of-seven Western Conference second-round series versus the Vancouver Canucks in Edmonton.

“We all want to win, that’s why we’re here,” Fleury said. “I really like Robin. We have a good friendship and I think he’s a really good goalie also. There are no hard feelings.”

The Golden Knights never led until the 3rd period when Alex Tuch scored early in the frame.  Vegas eliminated Chicago in five games 1:08