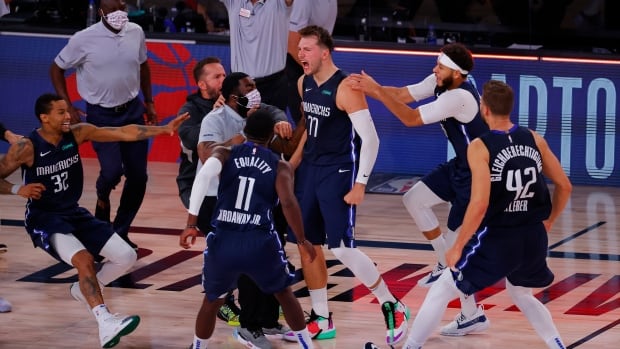 Luka Doncic hit a deep, step-back 3-pointer at the buzzer to cap a triple-double on a sprained ankle and the short-handed Dallas Mavericks beat the the Los Angeles Clippers 135-133 in overtime Sunday to even the playoff series at two games apiece.

Doncic had 43 points, 17 rebounds and 13 assists for his second straight triple-double.

Marcus Morris hit a 3-pointer with 9 seconds remaining in OT to give the Clippers the lead. It simply set the stage for Doncic’s winner over Reggie Jackson.

The Mavericks had their biggest playoff comeback, overcoming a 21-point, second- quarter deficit. They had a 16-0 run in the third to take the lead — and led by 12 points in the fourth before the Clippers rallied.

Lou Williams tied it at 121 by hitting two of three free throws with 50.6 seconds remaining in regulation. After Dallas failed to score on the next possession, the Clippers called a timeout to set up a play with 24.7 seconds left.

Kawhi Leonard’s 3-point shot with 0.2 seconds remaining was off the mark. The Mavericks failed on a lob toward big man Boban Marjanovic to send it to overtime.

Doncic didn’t have centre Kristaps Porzingis, who sat out with right knee soreness.

The 21-year-old Doncic was a game-time decision after he hurt his left ankle in the last game. He hardly looked hampered, going 18 of 31 from the floor. He tested the ankle often, too, with jump stops, pivots and an impressive Euro-steps to gain separation.

Doncic gets a breather

Doncic got a breather to start the fourth quarter. He sat on the bench as trainers worked on his ankle. He then hopped up and down in the hallway and rode an exercise bike before returning with 8:33 remaining and the Mavericks leading 106-96.

The teams exchanged 3-pointer after 3-pointer down the stretch of the fourth, with the Clippers pulling to 119-117 on Leonard’s 3-pointer with 1:56 left. The play was set up when Jackson saved a ball from going out of bounds on his end and tossed it all the way over to Leonard in the offensive end.

Williams scored 36 points for the Clippers, and Leonard had 32. Paul George had nine points as his struggles continued. He was 3 of 14 from the field and is shooting 29 in the series.

Before the game, Montrezl Harrell and Doncic exchanged a handshake and a hug as the patched things up. They were each given a technical foul after getting tangled up and exchanging words in Game 3.

The Celtics are moving on, while the 76ers are heading into an uncertain future.

Kemba Walker scored 32 points and Boston pulled away in fourth quarter to complete a first-round series sweep over Philadelphia 110-106 on Sunday.

Jayson Tatum added 28 points and had a playoff career-high 15 rebounds for Boston, which advances to the Eastern Conference semifinals and a meeting with the Toronto Raptors. The Raptors swept the Nets.

Boston’s win marks the first sweep in 15 playoff series meetings between the teams. It also is the third straight season that Philadelphia has failed to advance past the second round.

Walker went to the playoffs twice during his eight seasons in Charlotte, but never made it out of the first round. He said this is a small piece of what he sought in signing with Boston in free agency last summer.

“This is the reason I came to Boston,” he said. “That’s why I’m here for. To play high-level basketball each and every night. That’s what we’ve been doing.”

Joel Embiid led the 76ers with 30 points and 10 rebounds. Tobias Harris added 20 points and five rebounds despite leaving briefly after a scary fall that bloodied his left eye.

‘A lot of regrets’

Embiid couldn’t put a finger on one thing that upended the team this post-season.

“There’s a lot of regrets,” he said. “I feel like the focus wasn’t always there. We just gotta look ourselves in the mirror and do better.”

Harris was trying to contest a shot by Tatum at the 2:40 mark of the third quarter and inadvertently had his legs taken out from under him by Tatum. Harris fell on the left side of his face and laid on the court for several minutes as medical staff attended to him.

He suffered a left eye laceration and was cleared of a possible concussion. He returned to the game with 5:12 left in the fourth with a bandage over his left eye.

“I felt OK enough to go back out there and try and do something to help us win,” Harris said. “I rather go down with my guys than sitting in the back.”

‘Some type of bad luck’

But Harris out, Boston scored the final nine points of the third quarter as part of a 12-0 run. The Celtics’ lead grew to 96-79 in the opening minutes of the fourth.

“It just feels like we’re the Sixers, we always have some type of bad luck,” Embiid said.

Intensity was high throughout the game, with Philadelphia’s Harris, Josh Richardson and coach Brett Brown all drawing technical fouls. Marcus Smart also received one for Boston.

The 76ers entered the playoffs without All-Star guard Ben Simmons, who underwent season-ending surgery on his left knee following an injury during the seeding portion of the bubble schedule.

Philadelphia did its best to adjust without him, hanging in defensively against a Boston team that ended the regular season boasting one of the league’s most efficient offences. But the 76ers had issues scoring points down the stretch in close games.

That included Embiid, who despite posting back-to-back 30-point games in Games 2 and 3, at times struggled to keep up the scoring load in the second half of games. He also had two critical mistakes in Game 3.

The loss was the latest shortcoming for a 76ers team that entered the season with much higher aspirations after adding Al Horford in free agency to play in the frontcourt alongside Embiid and Harris.

But asked if he thinks he’s been able to show his best coaching effort in spite of the injuries down the stretch, Brown was direct in his assessment.