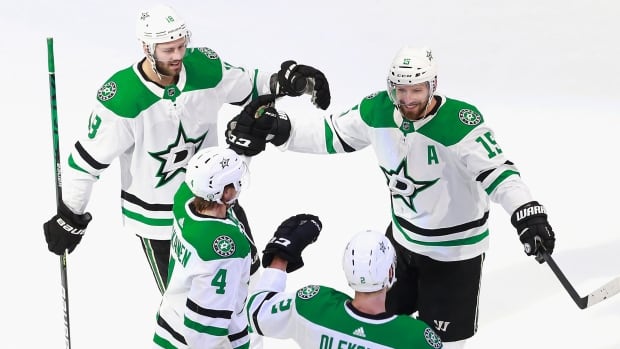 The top line for the Dallas Stars finally came to life, stepping up after a quick turnaround for an impressive start in round two of the Western Conference playoffs.

Stars captain Jamie Benn, Alexander Radulov and Tyler Seguin set the tone early, and piled on after that, in a 5-3 victory over the Colorado Avalanche on Saturday night.

“They definitely led the way for us tonight. I felt like the rest of the group followed,” said Blake Comeau, who had the goal that put Dallas ahead to stay. “Great game for them … that’s what we expect.”

Seguin opened the scoring with his first goal of this postseason, taking Benn’s pass from behind the net only four minutes into the game.

The trio of Jamie Benn, Alexander Radulov and Tyler Seguin combined for 8 points as the Dallas Stars edged the Colorado Avalanche 5-3 in game 1 of their Western Conference semifinal. 0:53

Two nights after the top trio had no points when the Stars scored seven goals in the finale of their opening series against Calgary, Radulov had two goals and an assist, Benn had three assists and Seguin added a helper to his opening goal.

“When that line scores an early goal like that, that’s huge. And then you’ve just got to let them go,” Stars interim head coach Rick Bowness said. “We’re not going anywhere without our top players.”

Game 2 of the best-of-seven series is Monday night.

Hart Trophy finalist Nathan MacKinnon had two goals and an assist for the Avalanche, who lost top goalie Philipp Grubauer to an injury early in the second period.

“Obviously, he’s in a position there where he tweaked something and he’s unable to continue,” Avs coach Jared Bednar said. “So that’s already bad news. Time will tell how long he’s going to be out. I have no idea at this point. … It’s going to be Francouz’s net here.”

Grubauer went face down on the ice after pushing away a shot with his right skate in the second period. He was replaced by Pavel Francouz, who had 27 saves in a 4-0 shutout over the Stars in round-robin play 2 1/2 weeks earlier in Edmonton.

Colorado Avalanche goalie Philipp Grubauer needed help getting off the ice after suffering an injury during game 1 against the Dallas Stars. 0:56

Colorado defenseman Erik Johnson was severely limited after his right leg appeared to awkwardly turn midway through the first period, though returned for the start of the second before leaving the bench again late in the period. He played less than eight minutes.

The Stars led 3-1 late in the first period after Benn got control of a bouncing puck for an odd-man rush. He made a cross-ice pass to Radulov, who then scored on a slight backhander through the legs of Grubauer.

After Colorado captain Gabriel Landeskog got his first goal of the postseason, a nifty poke around the post after going past the net to get within 3-2 five minutes into the second period, Radulov got his second goal to restore the Stars’ two-goal lead right after coming back on the ice.

Radulov was behind the coverage and got in an odd-man rush with Seguin, whose hard shot ricocheted off Francouz. Radulov scored on the rebound for his fourth playoff goal.

Dallas never trailed, though MacKinnon got the puck from Landeskog and took a shot from above the circles that got past Khudobin to tie the game just more than a minute after Radulov’s first goal.

“They came out hard, no doubt. Toward the end of that Calgary series, it looked like they kind of came into their own and started playing better than what they showed in the round robin,” Landeskog said.

“We made some bad decisions, some bad reads. I’ll give Dallas all the credit. They were engaged and ready to go to compete to win,” Bednar said. “We did some not smart things. Our brains were not turned on, and they weren’t engaged.”

Anton Khudobin had 28 saves for Dallas, including a sliding stop on a shot by Landeskog with about seven minutes left in the first period. That was only a minute after defenseman John Klingberg knocked a puck away to keep Colorado’s Ian Cole from being to take advantage of an open net after a rebound.