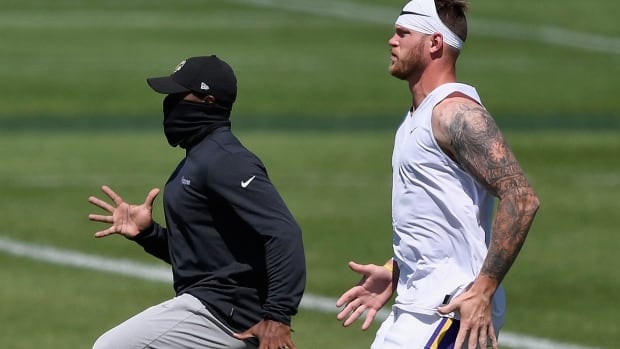 The lab used by the NFL for COVID-19 tests said Monday that an isolated contamination caused 77 “most likely false positive results.”

In a statement, BioReference Laboratories said the test results on Saturday were contaminated during preparation at its lab in New Jersey. Eleven clubs were affected, and the tests were re-examined and found to be false positives.

“The NFL immediately took necessary actions to ensure the safety of the players and personnel,” said Dr. Jon R. Cohen, executive chairman of BioReference, which does all COVID-19 testing for the 32 NFL teams in five labs across the country. “Re-agents, analyzers and staff were all ruled out as possible causes and subsequent testing has indicated that the issue has been resolved. All individuals impacted have been confirmed negative and informed.”

Among teams reporting false positives, the Minnesota Vikings said they had 12, the New York Jets 10 and the Chicago Bears nine. The entire episode puts the NFL and its testing procedures through BioReference in a precarious position with the opening game kicking off on Sept. 10.

There are five labs nationwide that service the 32 teams, with only the New Jersey facility having the false positives this weekend. Anyone testing positive for COVID-19 — even a false positive upon a retest — is required to have two more negative tests before being cleared to return.

The New York Giants said Monday that two staff members whose test results initially came back as false positives were back at work. Both were given a point of care test Sunday morning, the results of which were known within the hour, and were administered the standard test they undergo on a daily basis, the results of which were known Sunday night. Both results were negative.

Two other Giants staffers were deemed through contact tracing to have been in close contact for more than 15 minutes with their peers who had the false positives. They also returned to work Monday.

The Miami Dolphins will allow up to 13,000 socially distancing fans to attend their home opener against Buffalo on Sept. 20, a decision that divided political leaders and upset Bills coach Sean McDermott.

The same plan will be followed for the University of Miami’s home opener against UAB at the Dolphins’ stadium on Sept. 10.

Crowd size will be about 20 per cent of the stadium’s 65,326-seat capacity, with the limitation imposed because of the coronavirus pandemic. Groups of spectators will be spaced six feet apart.

Florida Gov. Ron DeSantis and Miami-Dade County Mayor Carlos Gimenez were scheduled to attend a news conference Monday at the stadium to discuss the decision, which they approved.

South Florida remains a hot spot for the virus, and not all reaction to the Dolphins’ plan was favourable. U.S. Rep. Donna Shalala, who served as the secretary of health and human services during the Clinton administration, expressed concern about the safety of those attending games.

According to the Dolphins’ 46-page plan for crowds, fans and stadium employees will be required to wear masks when not eating or drinking. Tailgating will be prohibited.