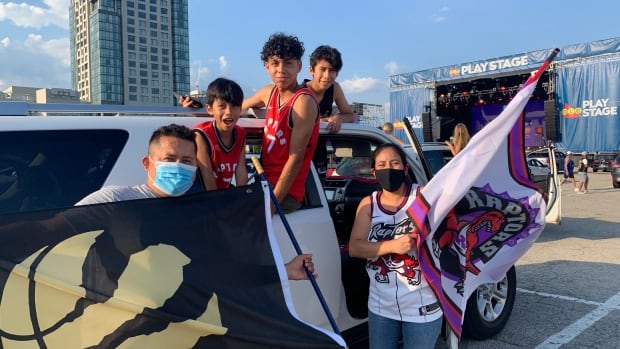 They just had to be there.

The Guaman family wasn’t going to miss being a part of the Toronto Raptors playoff run — they were jammed into their vehicle just a couple rows back from the massive screens in a parking lot at Ontario Place on the city’s waterfront.

Waving Raptors flags, draped in Kyle Lowry jerseys and honking their horn, Shirle Guaman, her husband, two sons and nephew soaked up every minute of Sunday night’s series-clinching 150-122 victory over the Brooklyn Nets.

“We love the Raptors. We have to support them no matter what. In the good and bad. We’re with them,” Guaman said.

The love affair between the Raptors and their fans is nothing short of remarkable. And the team keeps on delivering.

In a historic win for the team, the Raptors set a points record to capture the franchise’s first-ever series sweep.

Norman Powell provided 29 of Toronto’s 100 bench points in their 150-122 series-clinching victory over Brooklyn. 1:36

There were tense moments in the first half when Lowry appeared to roll his ankle and hobbled to the locker room. He didn’t return. At that point the game was still somewhat in the balance. There was concern at the parking lot party as a hush fell over the crowd.

That’s when the bench players for Toronto stepped up in a massive way. In fact, the Raptors racked up 100 points from their bench players and set an NBA record in the process.

“They never give up. They always keep going no matter what happens. And they know that people love them. We have the championship already and we’re going to do it again,” Guaman said.

WATCH | Raptors fans whoop it up:

Ontario Place in Toronto has become a sort of tailgate party for Raptors fans, parked in their cars and cheering on their team watching on a drive-in big screen. 0:23

As the Raps kept pouring it on, hundreds of fans in hundreds of cars at the Jurassic Pandemic Park waved flags and signs and brooms. Even superfan Nav Bhatia was roaming around the parking lot waving a towel and whipping fans into a frenzy. Organizers of the drive-in party said they couldn’t have put another car in the parking lot. Sold out. Distanced from one another. Virtual high-fives circulating from vehicle to vehicle.

With the Raptors up 25 points early in the fourth quarter, the celebration started in the parking lot. Four wins in short order, 12 more to go to repeat.

The team just keeps finding ways to win and every player steps up when needed most. In Sunday’s rout, Norm Powell, who took over Lowry’s spot, erupted for 29 points. His scoring output was the most off the bench by a Raptor in franchise history.

Toronto guard Kyle Lowry left the game after he appeared to roll his ankle late in the first quarter against Brooklyn. 1:19

Pascal Siakim recorded a career-high 10 assists. And then there was Serge Ibaka, who finished the game with 27 points shooting 12-for-14 (85.7 per cent) from the field and 3-for-3 from beyond the arc.

The Raptors are now 11-1 while in the Florida bubble — their only loss came against the Boston Celtics, who they will now meet in the second round. It’s the first-ever meeting between the two teams in the playoffs, with Game 1 scheduled for Thursday.

These are unprecedented times for a Toronto Raptors basketball team that continues to make history and rack up firsts — it’s been this way for the last couple of seasons.

Since Jan. 15, Toronto is league-leading 32-5. And they have the best coach in the league. Over the weekend Nick Nurse was named NBA Coach of the Year.

The defending champions now face a strong Celtics team, which swept Philadelphia in the first round. Boston won three of the four regular-season meetings with Toronto, including that 22-point victory over the Raptors on Aug. 7 inside the NBA bubble.

The three days between games, Lowry and the team get some valuable time to rest.

“It’s gonna take something pretty serious to keep him out,” said Nurse of his all-star point guard after Sunday’s win.

It was during the second round ast year that Raptors fans in Toronto and across Canada really started to rally behind the team — capped off by Kawhi Leonard’s Game 7 bounce-around-the-rim winner. That sent a shockwave of fandom across the country and Jurassic Parks popped up everywhere in the wake of it.

Now in a pandemic fans are showing up again. In cars. In a parking lot. Just to be a part of this team.

“It’s a little different but we still have the energy,” Guaman said. “We are here for them. No matter what. They love Toronto and Canada. And they know we love them a lot.”