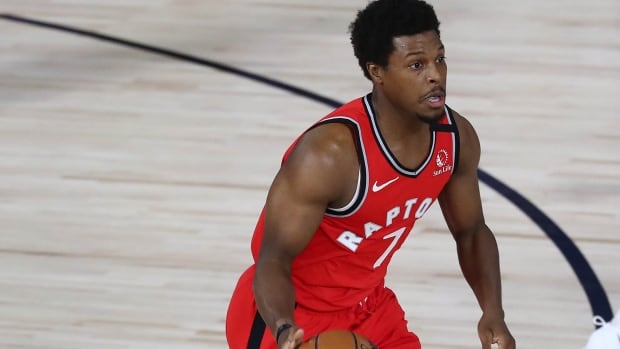 Kyle Lowry has been diagnosed with a left ankle sprain, the Toronto Raptors announced Monday.

The six-time all-star guard suffered the injury when he stepped on the foot of Chris Chiozza late in the first quarter of Toronto’s 150-122 series-clinching rout of Brooklyn on Sunday night. He underwent an MRI on the NBA campus at Walt Disney World near Orlando, Fla.

The team said it will update Lowry’s condition as appropriate.

The Raptors open the Eastern Conference semifinals Thursday against the Boston Celtics, the lone team to beat Toronto in the team’s 12 games during the NBA restart.

Norman Powell provided 29 of Toronto’s 100 bench points in their 150-122 series-clinching victory over Brooklyn. 1:36

The Raptors rallied without Lowry to complete their four-game sweep of Brooklyn. The bench scored an NBA-record 100 points. The Raptors’ 150 points also marked a franchise best.

The Raptors were ravaged by injuries all season, including losing Lowry for 14 games. They went 12-2 in his absence.

Toronto guard Kyle Lowry left the game after he appeared to roll his ankle late in the first quarter against Brooklyn. 1:19