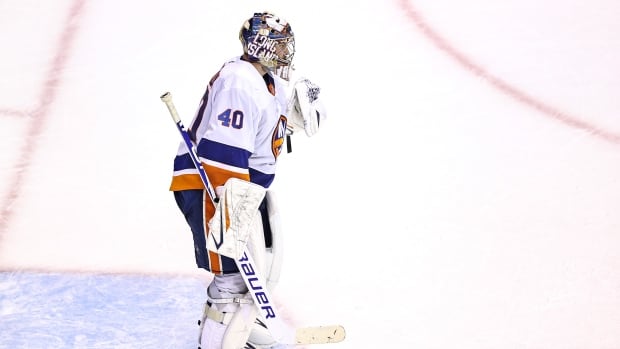 Semyon Varlamov did the rest.

Varlamov stopped 29 shots for his second straight shutout, Andy Greene scored his first playoff goal in a decade and the Islanders opened the series with a 4-0 win over the Flyers Monday night.

“He’s playing fantastic,” Greene said of the goaltender. “He’s making the hard saves look easy and in our breakdowns, we know he’s there for us.”

The Islanders withstood a second-period flurry in their first playoff meeting with the rival Flyers since 1987 and closed it out with three goals in the third.

Anders Lee’s fourth goal of the playoffs put the Flyers away on Monday night. 1:15

The 37-year-old Greene got it started in the first, becoming the 10th player in NHL history to go at least 10 years between playoff goals.

Varlamov was sharp all night, stretching his scoreless streak to 136 minutes, 20 seconds to become the first Islanders’ goalie with consecutive playoff shutouts. He has four career playoff shutouts.

Jean-Gabriel Pageau and Anders Lee each scored in the third period, and Devon Toews closed it out with an empty-net goal.

“We’re playing the right way as much as possible and that leads to our success,” Lee said.

The top-seeded Flyers came out flat and tried to make a big push, but were shut out for the second time in the playoffs. Carter Hart stopped 26 shots.

“We played with speed and put some pucks on net, but we’ve got to cash in on some of those chances,” Flyers centre Kevin Hayes said.

The Flyers beat Montreal in six games in the first round, their first playoff series triumph since 2012.

They did it despite being outscored 13-11, thanks to Hart, who had consecutive shutouts and a 1.95 goals-against average.

The Islanders have been stingy in the bubble as well, matching a franchise record by allowing fewer than 30 shots in nine straight games. New York knocked out third-seeded Washington in five games after taking out Florida 3-1 in the Stanley Cup qualifiers.

The Islanders had the early jump in the second-round opener. Greene scored 6 minutes in, beating Carter from near the blue line through traffic.

New York outshot Philadelphia 15-4 in the first period, but Carter made some spectacular saves to keep it 1-0.

“The first period was probably the worst we’ve had since we’ve been in the bubble,” Flyers centre Claude Giroux said.

The Flyers came alive in the second, ripping off the first eight shots and 15 in the period. Varlamov stopped them all with good positioning and some spectacular saves.

Pageau put New York up 2-0 3 minutes into the third period, one-timing a pass from Leo Komarov past Carter’s glove side. Adam Pelech set up the goal with a hard hit along the boards behind the goal.

Lee one-timed Mathew Barzal’s nifty cross-ice pass past Hart later the third and Toews scored on a long carom from his own end after Philadelphia pulled Hart for an extra attacker with 7-½ minutes left.