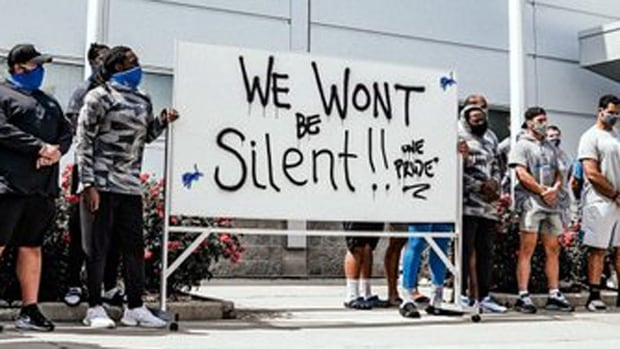 Lions head coach Matt Patricia opened the team’s morning meeting by allowing players to share their thoughts on the shooting of Blake, who is paralyzed from the waist down. A 29-year-old Black man, Blake was shot several times in the back outside of a parked car in Kenosha, Wis., on Sunday afternoon, three months after the death of George Floyd at the hands of Minneapolis police.

The players contishoonued to discuss Blake’s shooting and shared their personal experiences regarding race in the locker room.

Lions players and Patricia later filed out of the team’s practice facility in Allen Park, Mich., pushing a dry-erase board on wheels along the sidewalk to address the media. The words: “The world can’t go on,” was written in blue on one side of the dry-erase board and “We won’t be silent!! One pride,” was in black on the other side of the white board.

“I challenge everybody in the league to go out there and to continue these conversations and to listen,” Patricia told reporters. “These are real stories. … We want to be a part of the solution.”

Ben Crump, an attorney representing the Blake family, said three of Blake’s  sons — ages 3, 5 and 8 — were in the car at the time of the shooting.

Blake’s father, also named Jacob Blake, told the Chicago Sun-Times in a story published on Tuesday that his son is paralyzed from the waist down.

Lions defensive tackle Danny Shelton wore a shirt Tuesday with the words “We Demand Justice” written across the chest.

“I’ve never been more proud to be a part of this team,” said Detroit quarterback Matthew Stafford, per mlive.com. “An incredible group of guy in this locker room led by a coach who’s unwavering in his ability to give us space to talk.”

The Wisconsin shooting comes in the wake of nationwide protests over the shooting deaths of other unarmed Black people, including George Floyd in Minneapolis and Breonna Taylor in Louisville, Ky.