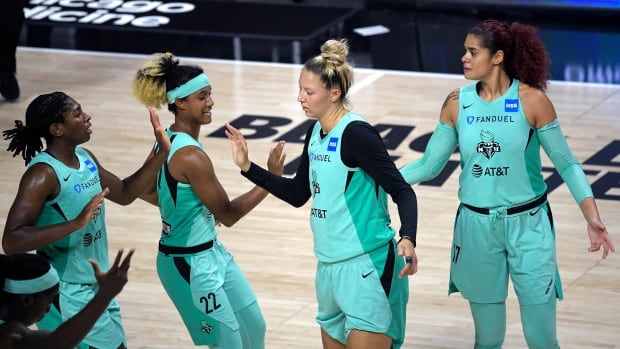 Layshia Clarendon drove the lane and was fouled with 0.3 seconds left and made both free throws as New York beat the Chicago Sky 101-99 on Tuesday night for the Liberty’s second win of the season.

New York (2-12) had lost seven straight games, with its last victory coming on August 7 against the defending champion Washington Mystics. The Liberty have been without No. 1 pick Sabrina Ionescu, who New York announced would not require surgery on her sprained ankle.

Amanda Zahui B led New York with 22 points and 12 rebounds. Clarendon finished with 17 points and five assists, and Kiah Stokes and Jocelyn Willoughby each scored 14 points for the Liberty, who hit 14 of 30 3-pointers.

Allie Quigley scored 29 points on 9-of-22 shooting for Chicago (10-5), which had a four-game winning streak snapped. Kahleah Copper and Courtney Vandersloot each scored 15 points, and Vandersloot had nine assists.

Quigley tied her career-high in points with a 3-pointer to pull Chicago within 97-94 with 1:36 remaining. Stefanie Dolson tied it at 99 with 20 seconds left on another 3-pointer. The Sky finished 10 of 25 from distance.

Canada’s Kia Nurse, of Hamilton, Ont., contributed five points and four assists and 1-of-7 shooting for the Liberty.