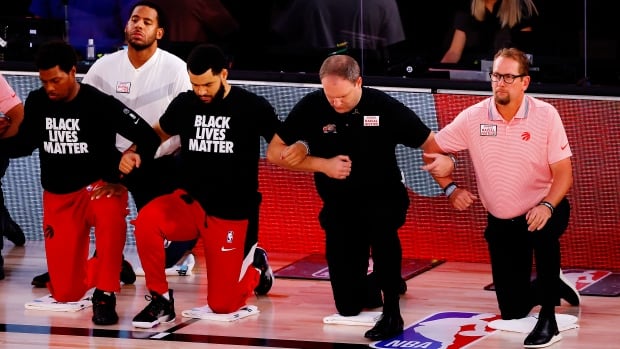 Toronto Raptors coach Nick Nurse says the idea of a boycott “is on the table” after players from his team and the Boston Celtics met Tuesday night in advance of their NBA playoff series.

Nurse says other ideas have been discussed as well as the teams look for ways to protest systemic racism and police brutality.

Raptors players Fred VanVleet and Norman Powell spoke Tuesday about the need to do more in the aftermath of another shooting of a Black man by police.

Jacob Blake was shot multiple times in the back by police in Wisconsin last weekend.

The Raptors have been at the forefront of the NBA’s social justice initiatives, arriving to the league’s Walt Disney World campus earlier this summer in buses emblazoned with the slogan “Black Lives Matter” and asking for justice for George Floyd, Breonna Taylor and other Black people who have been killed by police.

The Toronto Raptors say the police shooting of Jacob Blake in Kenosha, Wis, leaves them agonizing over the danger Black people live with — to the point that they might not play their opening game in the next round of the NBA playoffs. 2:05

Last week, video emerged of a law enforcement officer shoving Masai Ujiri as the Raptors president tried to get on the court following the team’s title-clinching win over the Golden State Warriors last year in Oakland, Calif.

The video was part of a countersuit, following a lawsuit by Alameda County sheriff’s deputy Alan Strickland.

“I think that we’ve got some pretty conscientious guys,” Nurse said. “We obviously have the footage and the situation with Masai, and our team just saw that recently as well, so there is some personal-ness to this.”

The six-time all-star guard suffered an ankle sprain when he stepped on the foot of Chris Chiozza late in the first quarter of Toronto’s 150-122 series-clinching rout of Brooklyn on Sunday night. He is considered day-to-day.