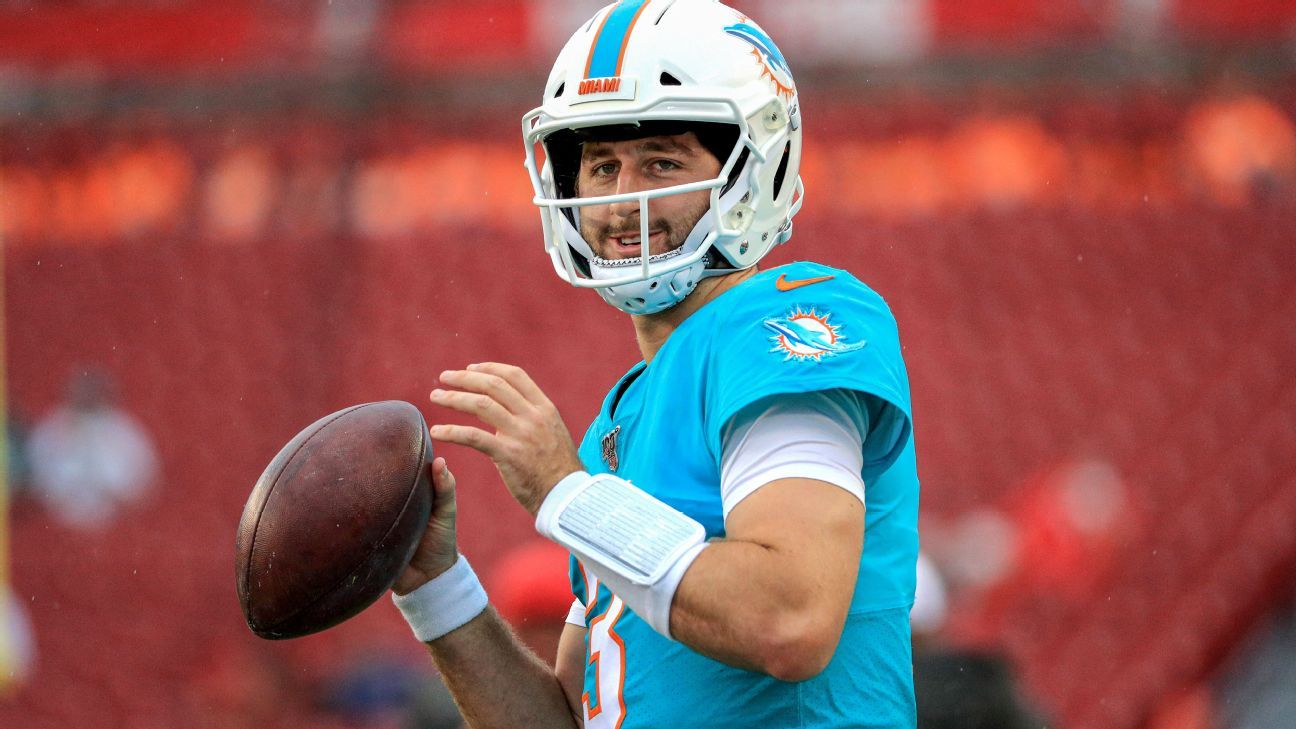 The path for Miami Dolphins quarterback Josh Rosen to become a starter again is now cluttered with roadblocks — the drafting of Tua Tagovailoa and incumbent starter Ryan Fitzpatrick’s return — but despite being a bit of a third wheel in the team’s quarterback room the 2018 first-round pick chose not to demand a trade or complain about the cards he’s been dealt. He took a step back and embraced it.

In his first media session of 2020, a surprisingly upbeat Rosen opened up about the Dolphins drafting Tagovailoa, the rocky start to his career, and his renewed focus to learn from Fitzpatrick and offensive coordinator Chan Gailey as he awaits his next starting gig — one that likely will have to come with another team.

“Maybe my mindset will change in some point in the future but I’m not really focused as much on winning a job as I am just getting better,” Rosen said. “… I was drafted in the first round, and I think people around the league still think I can play to a certain extent. Whenever that opportunity comes, wherever it comes, I just want to be prepared for it. Because they’re few and far between. I didn’t do great with the two I already had. Not many people get third chances. I’m definitely going to seize the opportunity when it comes.”

This time last year, Rosen had hopes of being the Dolphins franchise quarterback. He was dumped by the Arizona Cardinals after just one year, and Miami saw value in acquiring him for a 2019 second-round pick and 2020 fifth-round pick. His second chance didn’t go much better in Miami. Rosen got his chance to start in Week 3 after a couple of subpar Fitzpatrick performances but he didn’t even last three full games before coach Brian Flores benched him for the rest of the year. Now Miami drafted Tagovailoa as its future franchise quarterback, and Rosen is a bit of a forgotten man in Dolphins camp seeing decreasing reps in team drills as the days go along.

Rosen says he’s known Tagovailoa since high school, noting that the former Heisman Trophy winner nearly went to Alabama, but his focus has to stay on himself.

“It is what it is,” Rosen said about Miami drafting Tagovailoa. “I’ve just got to come out and try as hard as I can and compete as hard as I can every day and hopefully get the nod at some point in the future.”

Rosen says it was actually his Week 5 benching against Washington last season that changed his primary focus to development and correcting his deficiencies rather than just being centered on the idea of becoming a starter again.

“I did a big reality check and completely turned inwards and see what I could do better. I flicked myself in my head like you’re literally in the room with one of the best minds to ever do it — and that’s Fitz — I basically sat there and tried to swallow as much as I could from him and I took that process into the offseason,” Rosen said. “I’m pretty happy with how I feel behind center at this point — I got a lot of work to do but I think I’ve only scratched the surface with what I can do. The reason I’m sort of positive in this situation is all I can control is my development and I think it’s going in the right direction.”

Rosen has spent a lot of time this offseason focusing on understanding defenses and identifying guys pre-snap so that he can increase his processing speed and throw the ball quicker. He’s happy with his progress so far. He’s enjoying Gailey’s scheme which he says is more player-friendly and playmaker-friendly than what the Dolphins ran last season. Despite some limited snaps, Rosen has got positive reviews from coaches in training camp, too.

“Of all the quarterbacks, he’s probably got the biggest arm. He’s made some incredible throws,” Flores said. “Consistency — I would say we need to always be more consistent at every position, specifically the quarterback. There’s a lot of competition there from Fitz to Tua to Josh. But he’s a talented player. He’s been competing.”

It’s unclear whether Rosen will remain on the Dolphins roster for the rest of the 2020 season — some of that will have to do with the development of Tagovailoa and whether he’s ready to take on the job backing up Fitzpatrick, the likely Week 1 starter. It also will have to do with the trade offers the Dolphins get for him, and whether they see more value in a potential return or Rosen as a developing backup.

Either way, Rosen decided he saw more value in learning from Fitzpatrick and Gailey than asking for a trade.

“I like competing,” Rosen said. “So I don’t really know when or where — hopefully this year, here — I’ll get a shot to play; but I’m just trying to focus on preparing for that shot as best as I can. That’s within my control and I’m actually pretty satisfied with how I’ve come out and played this training camp. Obviously some holes here and there that I definitely need to improve on, but I really think I’m sort of trending in the right direction. I’m enjoying it more than I ever have actually.”