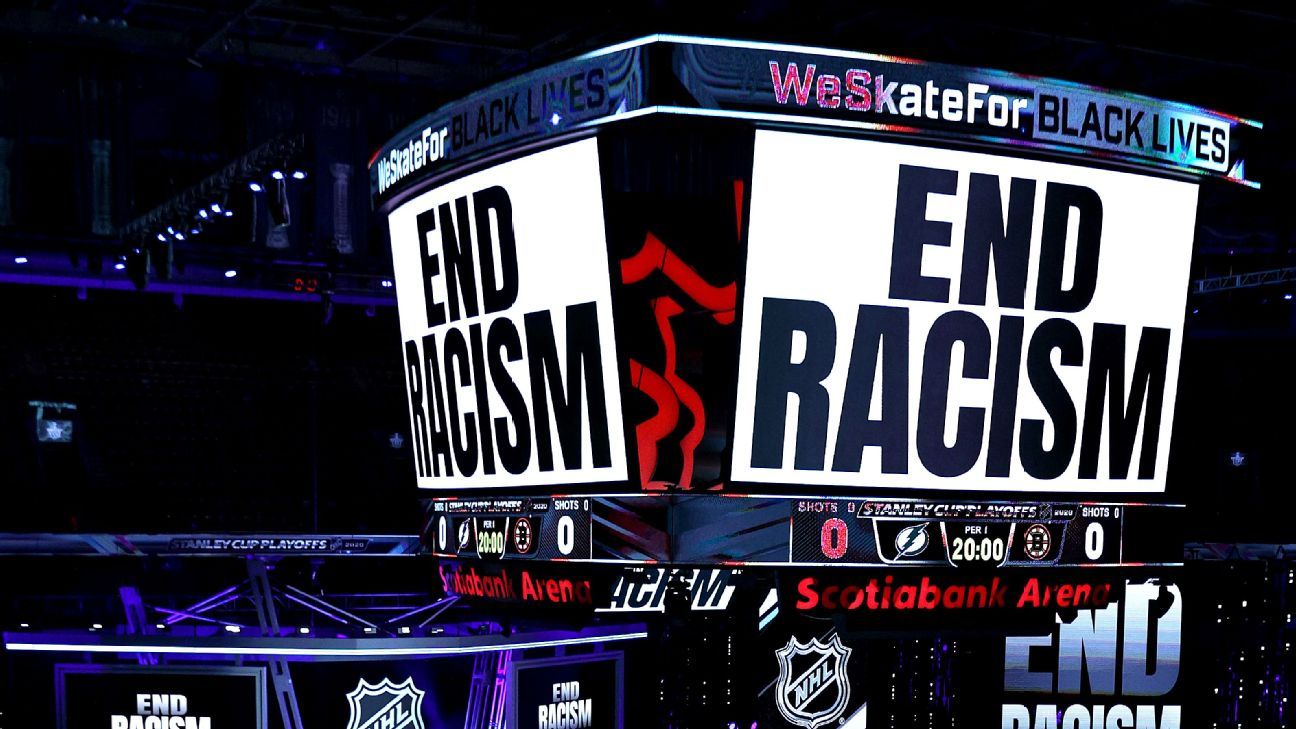 The National Hockey League held a moment of reflection before the Stanley Cup playoff game between the Boston Bruins and Tampa Bay Lightning on Wednesday night, while games in the NBA, WNBA and MLB were postponed as teams from those sports protested the police shooting of Jacob Blake in Kenosha, Wisconsin.

Before Game 3, video screens in the Toronto arena had large graphics that read “End Racism.” The public address announcer said: “Racism has been embedded in our society for far too long. Today and every day, the NHL and the hockey community are committed in the mission to combat racial injustice and achieve a fair society for all. The NHL would like to take this moment to wish Jacob Blake and his family well and call out to our fans and communities to stand up for social justice and the effort to end racism.”

A moment of silence of around seven seconds followed. Another pregame ceremony was scheduled for the Colorado vs. Dallas game in Edmonton, Alberta, later Wednesday evening.

Some criticized the NHL for its decision to hold games in light of the postponements in other pro sports.

“I don’t think we should be here. I think the NHL should postpone the games. I really feel we should be more supportive of Black Lives Matter,” said former NHL goaltender Kelly Hrudey, an analyst on Sportsnet in Canada. “Rather than watching hockey, I’d prefer to be having this conversion with my family. The NHL is missing out. This would be an important night for families to have the discussion again.”

Minnesota Wild defenseman Matt Dumba, a founding member of the player-based Hockey Diversity Alliance, knew about the NHL’s pregame plans and said he was disheartened by the response by the league and the players.

“NHL is always last to the party on these topics,” he told Sportsnet 650 in Vancouver on Wednesday. “It’s kind of sad and disheartening for me and for members of the Hockey Diversity Alliance, and I’m sure for other guys across the league. But if no one stands up and does anything, then it’s the same thing. That silence. You’re just outside, looking in on actually being leaders and evoking real change when you have such an opportunity to do so.”

Before a qualification-round game, Dumba delivered a speech on the ice about racial injustice and the killing of George Floyd. He also raised his first during the national anthems during Wild games. But Dumba, who is of Filipino descent, said it shouldn’t just be on the league’s few players of color to protest.

“It’s so much bigger than sports,” he said. “In hockey, that’s what it comes back to: You’re just relying on the minority guys to step up and say it. But what would really make the most impact is to have strong white leaders from teams step up and have their two cents heard. All the other white kids who grow up watching them, who might be their biggest fans, can look up and say, ‘Wow, if he’s seeing this and trying to stand up and to listen, then why am I not as well? Why am I continuing to hold on to this ignorance or hate that I feel towards a subject that I maybe don’t know everything about?'”

Blake, a Black man, was shot by police on Sunday in Kenosha, Wisconsin, as he attempted to enter the driver’s side door of his vehicle with three of his children inside. Video of the shooting was distributed on social media.

The NHL was in the middle of its first playoff game of the day, in which the Philadelphia Flyers defeated the New York Islanders in overtime of Game 2, when the NBA announced its slate of games had been postponed after the Milwaukee Bucks and Orlando Magic opted not to play in protest of Blake’s shooting.

“I literally found out about it walking over here,” Islanders captain Anders Lee said. “It’s something we’re going to have to look into and obviously there’s a lot of things going on in the world that [are] unjust. There’s a lot of inequality in this world. The NBA and those players are standing up for what they believe in. I think it’s a great thing they’re doing.”