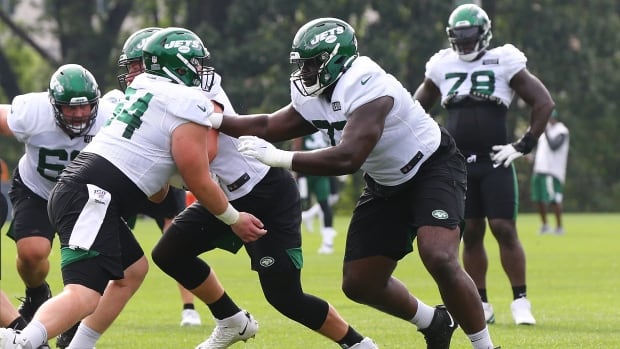 Multiple NFL teams announced Thursday morning they were cancelling practice to use the time instead to invest in social justice change.

The Indianapolis Colts and New York Jets said their teams would address ways to make a lasting social impact in the wake of the Jacob Blake shooting by a police officer in Kenosha, Wis. Blake, an unarmed Black man, was shot seven times by uniformed officers while moving toward his vehicle.

Jets coach Adam Gase and a few players said Wednesday they spoke about the shooting of Blake and racial injustice on Tuesday night. The virtual meeting included team chairman and CEO Christopher Johnson. Wide receiver Jamison Crowder and safety Bradley McDougald said the Jets were still discussing how they would handle the situation as a team.

The Chicago Bears announced a schedule change and dismissed media from the facility.

CBC Sports’ Morgan Campbell talks to Jacqueline Doorey about athletes’ responsibility (or lack of) to respond to social injustices. 3:36

The Detroit Lions cancelled practice on Tuesday to join protests related to the shooting. The New York Giants delayed their practice on Wednesday before deciding to move forward with the workout.

“The Colts will not practice today,” a team-issued release read. “Instead, the team will use the day to discuss and work toward making a lasting social impact and inspiring change in our communities.”

“Your responsibility is to take action. I don’t know that protest is an action. I would beg them to take action,” Arians said, per The Athletic. “Protesting doesn’t do crap in my opinion. I’ve been saying it since 1968.”

Arians said the team’s social justice committee was meeting later in the day Thursday. But he said the team wouldn’t cancel or postpone practice for the sake of it.

Arians said he fully supports moving or canceling practice if the team comes up with a way to bring change.

“Not just taking a day off,” Arians said.

Blake, 29, was shot, apparently in the back, on Sunday as he leaned into his SUV, three of his children seated inside. The shooting was captured on cellphone video and ignited new protests in the U.S. three months after the death of George Floyd under the knee of a Minneapolis police officer touched off a nationwide reckoning over racial injustice.

The protests weren’t limited to the NFL. The Milwaukee Bucks opted not to play in their playoff game Wednesday, and two other games were postponed later in the day.

Three Major League Baseball games were also postponed. Games between the Cincinnati Reds and Brewers in Milwaukee, Seattle Mariners and Padres in San Diego and the Los Angeles Dodgers and Giants in San Francisco were called off hours before they were set to begin.

Players and teams from the WNBA, MLS and tennis also sat out their competitions Wednesday night.