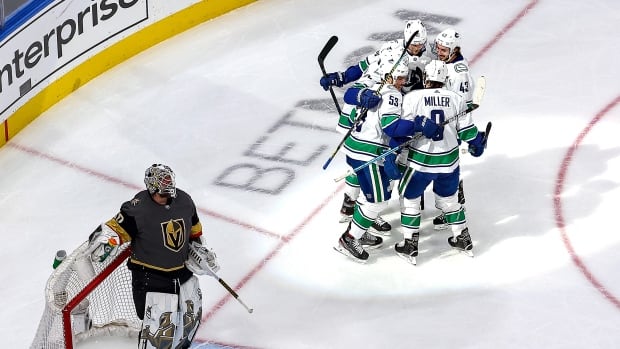 After making it look easy early on, the Vancouver Canucks are now learning how hard winning can be in the Stanley Cup playoffs.

A young Vancouver team with 10 players appearing in their first NHL playoffs sailed through the first two rounds of the postseason but now finds itself on the verge of elimination. A 5-3 loss to the Vegas Golden Knights Sunday left the Canucks trailing 3-1 in the best-of-seven Western Conference semifinal.

Vancouver’s season would end with a loss Tuesday night at Rogers Place in Edmonton.

“It’s unchartered territory for a lot of players, a lot of young guys on the team,” said veteran winger J.T. Miller, who assisted on all three Canuck goals Sunday. “We just have to worry about the next game.

“We’ve proven we can play with these guys for a long stretch in the first four games.”

In his daily recap, Rob Pizzo breaks down three teams looking to take a stranglehold on their playoff series.  2:52

The Canucks were saying all the right things heading into Game 5. They talked about focusing on the game at hand, refusing to be intimidated by the situation, playing their game.

“You can’t go into this game gripping your stick too tight,” said captain Bo Horvat, who leads the playoffs with nine goals. “You have to play the game, embrace the moment and everything is going to fall into place.

“The minute you start overthinking things, that’s when it goes the opposite way.”

The Canucks are facing an experienced Vegas team that has shown more speed, strength and depth.

Vancouver blew a chance to even the series Sunday. The Canucks battled back from an early 1-0 deficit to lead 3-2 heading into the third period before allowing three goals in 5:37.

“We put ourselves in a hell of a spot to win a hockey game [and] get right back in the series,” Miller said. “We need to do a better job.”

Vancouver lost to Minnesota in the opening game of the best-of-five play-in series, then won three straight. In the next round, against the defending Stanley Cup champion St. Louis Blues, the Canucks won the first two, lost in back-to-back games, then won the series in six games.

The Canucks have played well for stretches against Vegas but have been unable to sustain pressure.

After getting plenty of support from the third and fourth lines against the Blues, none of the Canucks’ bottom six forwards have registered a point against the Knights.

“Good teams have depth and they find scoring throughout their lineup,” head coach Travis Green said. “I’m not going to start putting pressure on certain guys to score.

Before the NHL resumed action after a 2-day postponement in support of protests against police shootings, a video was played reinforcing the league’s statement that Black Lives Matter. 3:02

Goaltender Jacob Markstrom has been Vancouver’s best player most nights. He leads the playoffs with 491 shots faced and 451 saves but may be feeling the fatigue of having played more minutes (841.11).

The Canucks have received outstanding performances from Elias Pettersson, the league’s top rookie last year, who is second in playoff scoring with 17 points (six goals, 11 assists). Defenceman Quinn Hughes, a nominee for this year’s Calder Trophy, is tied for scoring among rookies with 13 points, including 12 assists.

‘No team is going away lightly’

The Knights know a series isn’t over until a team wins the fourth game. Last year Vegas led the San Jose Sharks 3-1 in the opening round of the playoffs only to lose Game 7 in overtime.

“No team is going to go away lightly,” said head coach Peter DeBoer who coached the Sharks last year. “We are going to need our best game in order to beat them.

“Eliminating a team is always the toughest. You have to go in prepared for that and with the right amount of attention to detail and desperation level in your game in order to send a team home.”

Horvat said if the Canucks want to live to fight another day they must use their forecheck to contain Vegas’ offence.

“We have to get on them quick and delay their breakouts, spend more time in their end,” he said. “If we play good defensively, take care of our own net first, the offence just takes care of itself.

“We know it’s a do-or-die situation. Leave it all out there. We have nothing to save it for.”