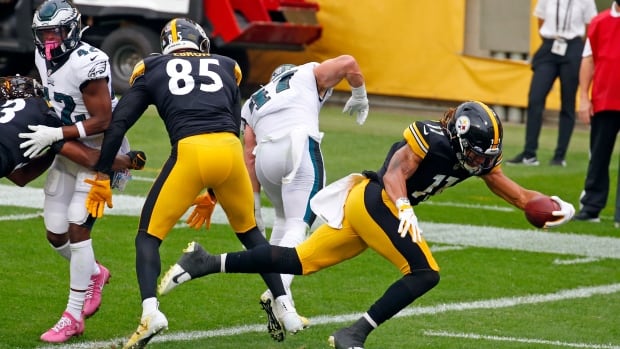 Canadian rookie Chase Claypool scored four touchdowns, including the clincher with 2:59 remaining, and the Pittsburgh Steelers remained unbeaten with a 38-29 win over the Philadelphia Eagles on Sunday.

Claypool, a second-round pick from Notre Dame, raced down the slot, hauled in a dart from Ben Roethlisberger and went the rest of the 35 yards to the end zone as the Steelers improved to 4-0 for the first time since 1979.

A wide receiver from Abbottsford, B.C., Claypool finished with seven receptions for 110 yards and three scores and added a 2-yard touchdown run on a jet sweep. Claypool became the first Canadian-born NFL player with three receiving TDs in a game since Joe Rooney did it for the Duluth Eskimos on Oct. 23, 1927.

Roethlisberger completed 27 of 34 passes for 239 yards and the three scores to Claypool. James Conner ran for 44 yards and a touchdown as the Steelers showed little rust despite having an unexpected bye week last Sunday after the NFL scheduled their trip to Tennessee while the Titans dealt with a COVID-19 outbreak.

Carson Wentz threw for 258 yards and two touchdowns but was also picked off twice, both times by Steelers cornerback Steven Nelson. Miles Sanders ran for 80 yards and two scores in his return to his hometown. Travis Fulgham caught 10 passes for 152 yards and a touchdown to give Philadelphia’s injury-ravaged receiving group a needed boost, but the Eagles (1-3-1) couldn’t pull off a second straight road win.

The Steelers scored on five straight possessions to take a 31-14 lead in the third quarter, but the Eagles stormed back behind Wentz, who connected with Greg Ward for an 8-yard touchdown pass and found Fulgham for a 4-yard score with 11:27 left.

Derek Carr threw for 347 yards and three touchdowns, outplaying Super Bowl MVP Patrick Mahomes along the way, and the Las Vegas Raiders nearly shut out the potent Kansas City offence in the second half to rally for a 40-32 victory that ended Kansas City’s franchise-record 13-game winning streak.

Josh Jacobs scored the go-ahead touchdown in the fourth quarter, Daniel Carlson added a field goal a few minutes later, and Mahomes was intercepted on fourth down to set up another touchdown by Jacobs that make it 40-24 with 5:26 left.

Mahomes led Kansas City quickly downfield, hitting Travis Kelce for a touchdown and Darrel Williams for the two-point try to make it a one-possession game. But after the Raiders (3-2) recovered the squib quick, Jacobs rumbled for a first down as Kansas City (4-1) used up their timeouts, and Carr sneaked for a first down on fourth-and-one near midfield with two minutes left to allow Las Vegas to end its five-game skid against Kansas City.

The Baltimore Ravens have grown accustomed to winning with a strong running game and the remarkable skill of versatile quarterback Lamar Jackson.

They took a different approach against the Cincinnati Bengals on Sunday, carving out a 27-3 victory with the kind of defensive performance that once defined the franchise.

Baltimore’s stout effort was punctuated by Patrick Queen’s 52-yard fumble return in the fourth quarter. It was the first NFL touchdown for Queen, who played with Burrow last year for national champion LSU.

Burrow was the No. 1 overall pick and Queen was No. 28. Now both are starters, and Queen is flourishing at middle linebacker, the position once manned by Hall of Fame member Ray Lewis.

The Arizona Cardinals certainly came to the right place to get back on the winning track. Everybody wins at MetLife Stadium against New York’s rotten apples.

Having Kyler Murray and the offence put up nearly 500 yards against the hapless and winless Jets was almost predictable.

Murray ran for a touchdown and threw another to DeAndre Hopkins as the Cardinals snapped a two-game losing streak with a 30-10 victory over the Jets, further putting coach Adam Gase’s future in jeopardy after an 0-5 start.

“I don’t want anyone on the team to feel satisfied with what happened today,” said Murray, who threw for 380 yards. “That’s not what it’s going to be like every weekend. I hope everyone knows that. Sundays aren’t easy.”

Murray had a two-yard TD run and hit Hopkins on a 37-yard strike on a day the Cardinals (3-2) had 496 yards in total offence. They had 500 yards until taking knees to end the game.