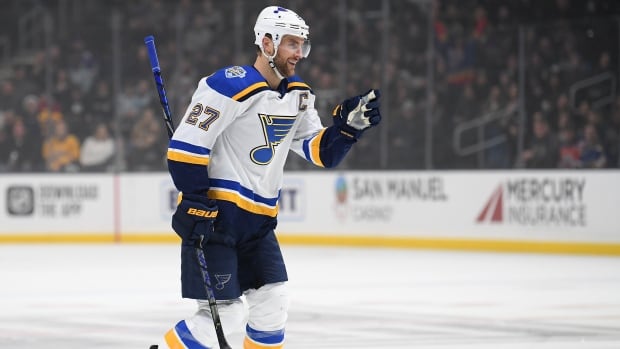 Alex Pietrangelo is Vegas bound, and the Golden Knights are shuffling the deck to fit him in.

Pietrangelo signed a $61.6 million, seven-year deal with Vegas on Monday that carries an $8.8 million annual salary cap hit through 2027. It’s the fifth-biggest cap hit for a defenceman in the NHL.

Adding the top free agent available gives Vegas another big-money talent, but the team needed to make another move to shed salary just to add him. General manager Kelly McCrimmon said the front office knew that going in and committed to making it happen to sign Pietrangelo.

“When we looked at opportunities to improve our team, we had what we believed was an incredible rare opportunity to add a defenceman, an elite player, like Alex to our team,” McCrimmon said. “We projected what a contract would be for Alex and then at the end of that process asked ourselves, `Does this make us a better team? Does it improve our chances of winning?’ We believe quite strongly that it does.”

Before finalizing Pietrangelo’s contract, the Golden Knights traded defenceman Nate Schmidt to the Vancouver Canucks for a 2022 third-round pick, clearing his $5.95 million cap hit off the books. McCrimmon said this was the only scenario in which Vegas would have considered trading Schmidt, and Vancouver became the beneficiary.

“Nate has been one of the top defencemen in our division in recent years,” Canucks GM Jim Benning said. “He’s a dynamic player who competes hard all over the ice. I think he will be a really good fit in our group.”

After already sending centre Paul Stastny to Winnipeg, the team likely needs to make some other trade to become cap compliant, which McCrimmon assured will be the case come opening day. That move will not be a trade of goaltender Marc-Andre Fleury, even after committing long term to Robin Lehner, who is expected to be ready for training camp after undergoing clean-up shoulder surgery this week.

“We see the goaltending position being incredibly important this year,” McCrimmon said. “Marc and Robin are going to be our goaltenders as we go into the off-season, into training camp and into the season.”

After signing Pietrangelo and trading Nate Schmidt the Golden Knights have $81,624,105 in cap committed to 2020-21 according to <a href=”https://twitter.com/CapFriendly?ref_src=twsrc%5Etfw”>@CapFriendly</a> (Not counting Carl Dahlstrom who I believe will start in AHL). <br><br>That means they are still $124,105 over the cap.

Goaltending wasn’t the Golden Knights’ issue in losing to Dallas in the Western Conference final. Scoring was, as they had just eight goals in five games.

Pietrangelo, 30, is coming off posting a career-high 16 goals despite the season being cut short at 70 games. He finished fourth in Norris Trophy voting and is one of the best right-shooting defencemen in the league, so adding him does make Vegas better, even at the expense of trading a popular teammate in Schmidt.

“He’s one of the top four or five defenceman in the game,” McCrimmon said of Pietrangelo. “He’s the first over the boards in every situation for his team.

Pietrangelo leaves the St. Louis Blues after serving as captain of their 2019 Stanley Cup championship team. He has 109 goals and 341 assists for 450 points in 758 regular-season NHL games and had a post-season-best 16 assists and averaged almost 26 minutes of ice time during the Blues’ Cup run.

‘One of the best Blues ever’

“He has been a stalwart player for us, for this team for a number of years,” Blues general manager Doug Armstrong said Friday night. “A huge part of a championship-calibre team. He’s going to go down so far as one of the best Blues ever.”

St. Louis moved on from Pietrangelo, a homegrown prospect who was the No. 4 pick in the 2008 draft, before he did. The Blues signed former Boston Bruins defenceman Torey Krug to a $45.5 million, seven-year contract Friday, essentially ruling them out of keeping Pietrangelo after more than a year’s worth of negotiations couldn’t amount to an agreement.

“We couldn’t find something that made everyone comfortable,” Armstrong said. “It’s not the first time, it won’t be the last time this happens in the NHL. You just wish it didn’t happen because of the respect and the desire we had to keep Alex here.”

Pietrangelo became the last of the top-tier free agents to find a landing spot, after Taylor Hall signed an $8 million, one-year deal with the Buffalo Sabres on Monday. Krug was the other, and winger Mike Hoffman is the top player left on the market after a 29-goal, 59-point season with the Florida Panthers.

Hall took the opposite approach of Pietrangelo and Krug with the cap staying flat amid pandemic-ravaged revenues.

“We knew it was going to be a unique marketplace coming into free agency,” Hall said Tuesday. “Once free agency started, I think we were made aware pretty quickly at how much things had changed and how COVID had affected a lot of different things. So, it kind of changed our decision-making from there.”

Pietrangelo had wanted to stay with St. Louis, but the signing of Krug altered his decision-making. The Toronto area native flew to Las Vegas on Saturday to meet with the Golden Knights brass and owner Bill Foley, a visit that paved the way for this contract.

“It was clear to see how anxious he is to continue to win,” McCrimmon said. “He made the comment that winning a Stanley Cup has made him even hungrier to do it again, so the commitment to winning is certainly a really big factor in his choosing to come here for the next stage of his career.”