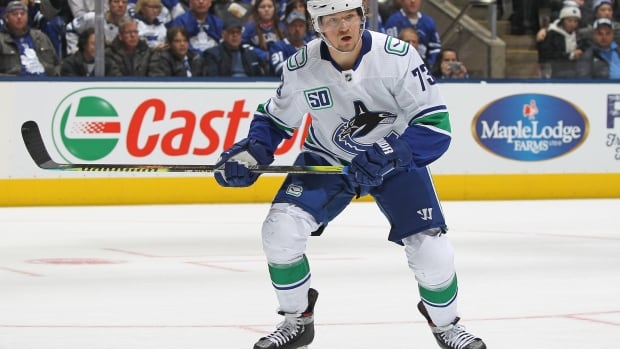 The Montreal Canadiens signed forward Tyler Toffoli to a four-year deal on Monday.

The deal carries an average annual value of $4.25 million US.

Toffoli played 10 regular-season games for the Vancouver Canucks this season after being acquired in a February trade from the Los Angeles Kings.

The 28-year-old from Toronto had six goals and four assists with the Canucks after putting up 18 goals and 16 assists through 58 games with Los Angeles. He added two goals and two assists in seven games of Vancouver’s playoff run.

Toffoli has 139 goals and 151 assists in eight seasons in the NHL.

He was selected in the second round (47th overall) by the Kings in the 2010 draft.

Alexis Lafreniere isn’t going back to play junior hockey in Quebec, and the Rangers hope he’s on the ice in New York sooner than later.

The Rangers agreed to terms Monday with the No. 1 draft pick on his three-year, entry-level contract that includes the lucrative bonuses typical for a player selected in that spot. Lafreniere as expected won’t return to Rimouski Oceanic of the Quebec Major Junior Hockey League, which has started its season, and general manager Jeff Gorton hopes to get him to the New York area by early November to begin training for next season.

“We’re really excited about getting him signed,” Gorton said. “Looking forward to the first time we can actually see him on the ice.”

The Quebec-born left winger is expected to play right away in the NHL, which is targeting a Jan. 1 start for the 2021 season. Lafreniere joins a budding young core that includes MVP finalist Artemi Panarin, top centre Mika Zibanejad, defencemen Adam Fox and Anthony DeAngelo and goaltender of the present and future Igor Shesterkin.

New York signed Panarin to a big-money, long-term contract July 1, 2019, and doesn’t need to spend like that now after winning the draft lottery and stockpiling so much talent. The future may not be now, but it’s not far off.

“Keep in mind the big picture,” Rangers president John Davidson said. “We want to play well this season, whenever the season is — whenever it starts and wherever it starts, we don’t have any idea. When you manage a hockey club, we have to think of today, tomorrow and the future and we like some of the pieces that we have that are going to put us into that position.”

Lafreniere agreed to a contract a day after turning 19 and less than a week since going first overall. He’s coming off a season in which he put up 35 goals and 77 assists for 112 points with Rimouski and was the MVP of the world junior hockey championship for getting 10 points in five games and leading Canada to the gold medal.

The Rangers are hoping for more of that kind of production eventually from their first No. 1 pick since the universal draft was implemented in 1969. They also made a handful of free agent signings since the market opened Friday to improve, especially on defence.

There’s no bigger symbol of the Rangers’ future than Lafreniere, who will get help from the organization finding housing. Davidson said Lafreniere is welcome at his house — which would mimic Sidney Crosby living with Pittsburgh Penguins co-owner Mario Lemieux early in his pro career — and several other players have offered taking the prospect in.

“We’ll find the best-case scenario for him,” Gorton said. “We do have a number of people that have reached out, and there’s no shortage of people that we think can help and put him in the right spot.”

The Abbotsford, B.C., native notched 28 points in 68 games with the Islanders this past season during his second NHL campaign, including six goals.

Defenceman Erik Gustafsson signed a one-year contract with the Philadelphia Flyers on Monday that has an annual value of $3 million US.

The 28-year-old blueliner spent last season with Calgary and Chicago, posting six goals and 29 points in 66 games with the two clubs.

Gustafsson was selected 93rd overall by the Edmonton Oilers in the 2012 NHL Draft.

Chicago agreed to one-year contracts with Mattias Janmark and Lucas Wallmark on Monday, adding a pair of forwards to help make up for the loss of Brandon Saad.

Saad was traded to Colorado on Saturday, and the 27-year-old Janmark could step into his role on Chicago’s penalty-killing unit.

“I don’t think they promised me anything, but they said that they see me as a two-way forward and I can fill in in a lot of the slots,” Janmark said. “And that’s how I see myself, too, so now it’s up to me to just play as good as I can and earn as many minutes as I can.”

The 25-year-old Wallmark played for Carolina and Florida last season. He had 11 goals and 12 assists in 60 games with the Hurricanes, and then had a goal and an assist in seven games with the Panthers.

Janmark had six goals and 15 assists in 27 games for Dallas last season. He also had one goal and seven assists in 26 post-season appearances, helping the Stars reach the Stanley Cup Final.