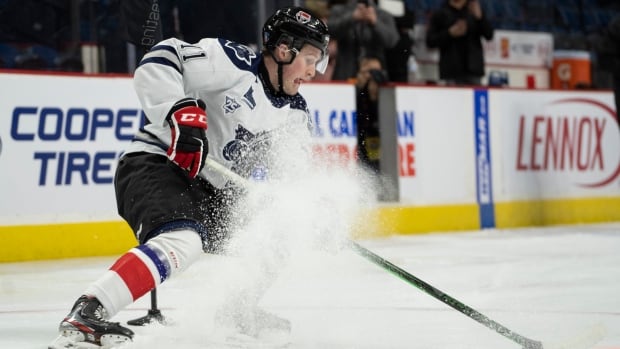 The New York Rangers agreed to terms Monday on a three-year, entry-level deal with No. 1 draft pick Alexis Lafreniere, who is expected to play in the NHL when next season starts.

Lafreniere signed a day after turning 19 and less than a week since New York selected him first overall. The Quebec-born left winger is another talented young player to add to the Rangers’ rebuild that could get them back to being legitimate contenders as soon as this upcoming season.

The league is targeting a Jan. 1 start for what it hopes to be an 82-game 2021 season. Lafreniere skated in 52 games for Rimouski Oceanic of the Quebec Major Junior Hockey League last season, putting up 35 goals and 77 assists for 112 points.

Lafreniere was also the MVP of the world junior hockey championship last year, recording 10 points in five games to lead Canada to the gold medal.

According to the team, general manager Jeff Gorton says the plan for Lafreniere is to have him head to New York and prepare for an NHL training camp rather than return to Rimouski.

The Rangers are hoping for more of that kind of production eventually from their first No. 1 pick since the universal draft was implemented in 1969. They also made a handful of free agent signings since the market opened Friday to improve, especially on defence.

They signed Jack Johnson to a $1.15 million, one-year deal after he was bought out by Pittsburgh and added fellow defenceman Anthony Bitetto, a Long Island native. New York also signed veteran Keith Kinkaid to be their third goaltender behind Igor Shesterkin and Alexandar Georgiev after buying out Henrik Lundqvist, who joined the rival Washington Capitals.

The Montreal Canadiens have signed forward Tyler Toffoli on a one-way, four-year contract. The deal has an average annual value of 4.25 million dollars.