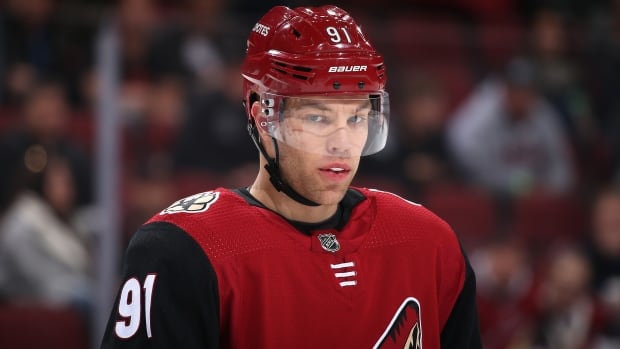 Taylor Hall refused to buy into the negativity surrounding the Buffalo Sabres, and instead focused on the positives.

The opportunity to alongside captain Jack Eichel was a factor. Playing for a familiar coach in Ralph Krueger another. Add in Buffalo being close to his home in Toronto, and the the Sabres willing to sign Hall to a one-year deal, allowing him to keep his options open for next year, were enough to put him over the top.

“When you look past some of the smoke and some of the stuff that’s happened to the Sabres over the last couple of years, under the hood, there’s some really good pieces,” Hall said during a video call Monday, a day after signing a $8 million contract.

“Hockey’s an interesting thing. Three years ago, no one would’ve thought that Colorado would be the No. 1 destination,” he added, referring to a Nathan MacKinnon-led Avalanche team that’s made three straight playoff appearances after enjoying just one from 2011-17. “Things can turn pretty quick, especially if you have elite pieces like the Sabres do.”

The 10-year veteran and 2018 NHL MVP was the top forward available once the NHL’s free-agency period opened Friday. And though Hall acknowledged receiving longer-term offers from numerous teams, he settled on a one-year test-run contract with Buffalo.

‘I’m betting that the Sabres can improve’

“I don’t want to call it a `Prove it’ deal. It’s a little bit of a `Show me’ deal,” Hall said. “Obviously, I’m betting on myself, but I’m betting that the Sabres can improve and have a good hockey season. If I didn’t, I wouldn’t be here.”

Selected by Edmonton with the No. 1 pick in the 2010 draft, Hall is on his third team in two years after the New Jersey Devils traded him to Arizona in December.

He joins a Sabres franchise in the midst of a nine-year playoff drought, which ranks as the NHL’s longest active streak and one short of matching the league record.

The lack of success in Buffalo is attributed to impatient owners in Terry and Kim Pegula, a terrible drafting record, and a revolving door of coaches and general managers.

Krueger, entering his second season, is Buffalo’s sixth coach since the 2012-13 season. And Buffalo’s front-office underwent its latest shuffle in June, when Kevyn Adams took over after Jason Botterill was abruptly fired after just three seasons.

Despite Hall’s on-ice success, the six-time 20-goal seasons has been on teams that have made the playoffs just twice, including the Coyotes this year.

Hall couldn’t overstate how big of a factor Krueger’s presence played in his decision. Krueger was an assistant coach in Edmonton during Hall’s rookie season, and eventually became the Oilers coach in 2012-13.

“That year I had him as a head coach was probably my most successful year … other than my MVP year,” said Hall, who enjoyed his first of three point-a-game seasons under Krueger, in scoring 16 goals and 50 points in 45 games.

He also noted the immediate impact Krueger had on Eichel, who scored a career-best 36 goals last season.

Hall said the tipping point in his decision came Sunday, when he and Krueger had a long chat on FaceTime.

“He told me about Buffalo. I could just see it in his face that he really wanted me there,” he said. “It’s a good feeling to be wanted like that.”

Hall could not say the same thing about the Coyotes, where he was put off by internal turmoil that led to GM John Chayka resigning a week before the start of the playoffs. After being open to re-signing with Arizona, Hall said he elected to test free agency after having no discussions with Chayka’s successor, Bill Armstrong, who was hired in mid-September.

Hall’s now focused on playing for the Sabres for one year, and hopefully longer.

“Honestly, the best thing for both sides is that this goes really well, and I’m a Sabre for a long time,” he said.

Krueger is confident Hall can be convinced to stay.

“I have no fear in this it all, because I know Taylor Hall. If we get this atmosphere right, we get the results right, and he’s having fun, that will be a major driver in him,” Krueger said. “The end result will take care of itself. It’s not the length of the contract that matters in this case, it’s how the process evolves.”

A year ago, Hall was expecting to sign a long-term deal in free agency, before the NHL’s economics were upended because of the coronavirus pandemic. He said the flat salary cap, which remains at $81.5 million from last year, altered the market in limiting how much teams were able to offer.

“You’ve got to adapt, and I think this was the best play for me,” Hall said. “I’m playing hockey next year and my salary’s $8 million. I don’t have a lot to complain about.”