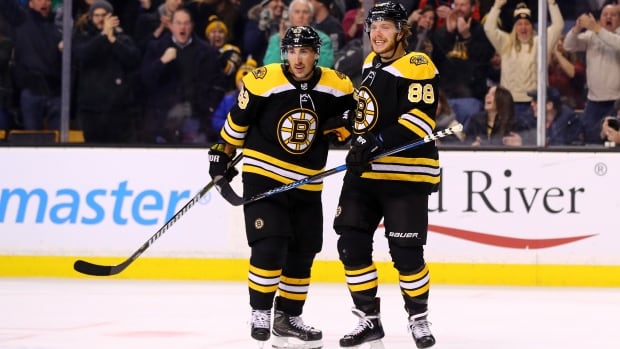 The Boston Bruins could be without two-thirds of their top line when the next NHL season starts after the team said Tuesday that David Pastrnak and Brad Marchand each underwent surgery last month.

Pastrnak isn’t expected to be fully recovered and able to play until mid-February after an operation to repair a torn labrum in his right hip Sept. 16 in New York. Pastrnak shared the Rocket Richard Trophy by tying for the league lead with 48 goals last season and missed some time in the playoffs because of injury.

Marchand won’t be good to go until roughly mid-January after having a sports hernia repaired Sept. 14 at UMass Memorial Medical Center in Worcester, Massachusetts. He was the NHL’s first-team All-Star left wing in the post-season voting after having 87 points on 28 goals and 59 assists in 70 games when play was halted.

Boston defenceman Charlie McAvoy had arthroscopic surgery on his right knee Sept. 8 and is expected to be ready for the start of training camp.

The Bruins said each surgery was successful, but the reigning Presidents’ Trophy winners for finishing with the most points in the regular season will have an uphill climb at the start in 2021 if play begins Jan. 1 or soon thereafter, which the NHL is targeting.

Boston lost to eventual Stanley Cup champion Tampa Bay in the second round of the playoffs in the Eastern Conference bubble in Toronto. The Bruins got to Game 7 of the Cup Final in 2019 before losing to St. Louis and have made the playoffs for four consecutive years.

Despite losing defenceman Torey Krug to St. Louis in free agency, they were considered among the favourites in 2021 to win their first title in a decade. There’s still the question of what will happen with 43-year-old captain Zdeno Chara, who’s a free agent.

Much of the Atlantic Division has also improved this off-season, making the challenge even tougher on the Bruins, who added big winger Craig Smith in free agency and will have to tap into their depth without Pastrnak and Marchand for some time.

“To get through the playoffs, which is what we want to be — a team that gets in and get through — that’s the ultimate goal,” general manager Don Sweeney said last week. “You have to have the ability to survive the war of attrition. Years that we’ve had success in that regard, sometimes it’s being fortuitous that you don’t get the catastrophic injuries. And other times, it’s just what happens in the course of the game.”