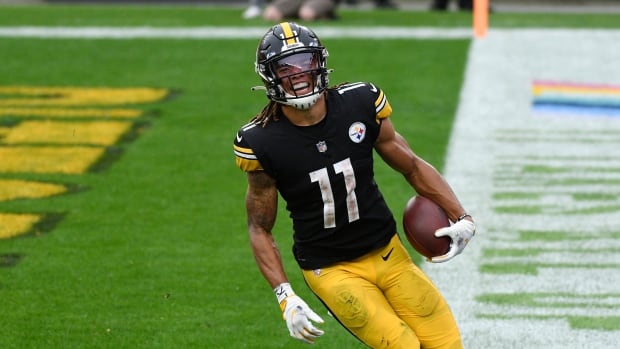 In a season already marked by the impact of multiple talented rookie pass-catchers, Chase Claypool of the Pittsburgh Steelers made NFL history on Sunday.

The hulking Abbotsford, B.C., native was instrumental in his team’s 38-29 victory over in-state rival Philadelphia, becoming the first rookie in league history with at least three receiving touchdowns and one rushing touchdown in a single game.

“He has got some God-given abilities that not many people in this world have,” Roethlisberger told ESPN’s Brooke Pryor. “He’s big, fast and strong and he’s very, very smart. I’m really proud of the way he’s playing right now.”

Although COVID-19 concerns led the NFL to cancel its pre-season, Claypool has quickly established himself as a key contributor on the Steelers’ offence and earned the trust of his signal caller.

“That last touchdown [in Week 5 against Philadelphia] is a perfect example,” Roethlisberger said of Claypool’s 35-yard catch-and-run score. “[I] changed the play and he makes it happen. I just have to give him a little bit of a cue. It’s awesome.”

The second-round draft choice, who played four years at the University of Notre Dame, has witnessed an increased workload throughout his first pro season, as evidenced by an ascending amount of passing-game targets in each of Pittsburgh’s first four games.

Claypool, 22, possesses a tantalizing combination of size and speed, the likes of which has drawn comparisons to former Detroit Lions receiver Calvin Johnson.

During the NFL’s annual pre-draft combine in February he joined Johnson as the only receivers ever to run a sub-4.45 time in the 40-yard dash at 6-foot-4, 235-pounds or larger.

Coupled with a sparkling senior campaign in South Bend where he amassed 1,037 yards and 13 touchdowns on 66 receptions, Claypool was still relegated to being the 11th wideout selected in April’s draft.

While lost in the shuffle of a deep rookie receiving class and just one year of elite collegiate production, it was no coincidence that when the instability of Notre Dame’s quarterback situation was resolved in 2019 so too was Claypool’s output.

Thus far, exhibiting lab-created athleticism and an array of highlight-reel plays, he’s outshone many of those chosen ahead of him.

In effort to temper expectations – as most NFL head coaches habitually do – Pittsburgh’s Mike Tomlin summarized Claypool’s most recent performance by neatly suggesting “he had a good matchup.”

A tough sell considering he also became the first Steelers rookie since 1972 to record a rushing and receiving touchdown in a single game — a feat last achieved by Hall of Famer Franco Harris.

No stranger to setting records, he scored on an 84-yard play during Pittsburgh’s Week 2 win over the Denver Broncos. The first of his career and the longest touchdown from scrimmage in NFL history by a Canadian-born player.

Initially a star AAU basketball player, Claypool shifted his focus to football midway through his time at Abbotsford Senior Secondary where he helped the Panthers to a 2015 AA high school championship appearance.

Off the field, Claypool’s journey to the NFL hasn’t come without personal hardship. In 2011, his older sister, Ashley, took her own life.

He detailed his experience in 2017, saying the loss of his sister is one of his greatest driving forces in fulfilling his on-field ambitions.

“I actually think about it every day – especially when it comes to playing football … You’ve got to find a reason why you’re doing something,” he said. “She’s my reason.”

As a result of pandemic-related travel restrictions between Canada and the United States, Claypool last saw his family shortly after April’s draft.

“It’s definitely tough because I know they won’t be able to come to any games this year … but I’m used to it.” he said before Pittsburgh’s Week 5 game against Philadelphia. “I just stay in touch and I know they’re supporting me back home.”