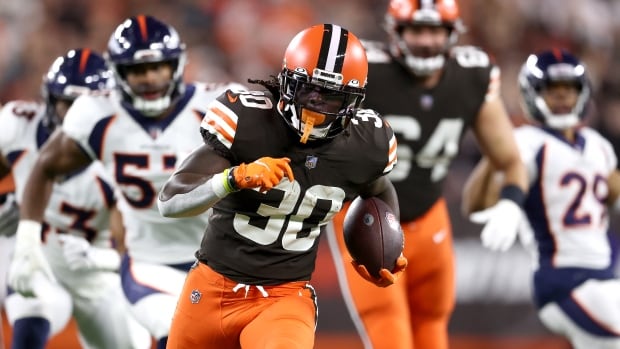 Case Keenum stepped in for Baker Mayfield and made the most of his first start in two years, third-string back D’Ernest Johnson rushed for 146 yards and the busted-up Cleveland Browns beat the Denver Broncos 17-14 on Thursday night in Cleveland, Oh.

Keenum didn’t put up impressive stats (21 of 33 for 199 yards), but threw a touchdown pass and did enough — as did Cleveland’s maligned defence — to get the Browns (4-3) a much-needed victory.

They survived without Mayfield, who sat out with a shoulder injury and could miss more time.

“You don’t have to get ready if you stay ready,” Keenum said after his first win since 2019.

Johnson, playing because stars Nick Chubb and Kareem Hunt were both out with calf injuries, had the best game of his career. He scored on a 4-yard run in the first half and picked up 52 yards on seven carries as the Browns chewed up the final 5:17 after the Broncos pulled within three.

“The last drive was very frustrating,” Broncos coach Vic Fangio said. “We loaded up against the run and we couldn’t stop them.”

Afterward, Johnson, who worked on a fishing boat when he wasn’t drafted, got doused with water by his teammates in a raucous locker room celebration.

“He got a game ball and it was a good moment,” Keenum said. “I mean, there was lots of cheering, lots of water and everything being thrown. And he gave a little speech that was heartfelt.”

Denver quarterback Teddy Bridgewater threw a pair of TD passes and gutted it out while playing with foot and quadriceps injuries. He finished 23 of 33 for 187 yards with one interception.

The Broncos (3-4) dropped their fourth straight game, and maybe as importantly, lost star linebacker Von Miller to a sprained ankle. The eight-time Pro Bowler missed all of 2020 with a dislodged ankle tendon.

Miller got hurt late in the first half when he banged legs with teammate Dre’Mont Jones while rushing Keenum.

Mayfield, who has been playing with a torn labrum, also has a broken bone in his non-throwing shoulder but believes he can continue to play with it, a person familiar with the quarterback’s health told the Associated Press.

Mayfield hopes the injury improves enough in coming days days that he can play against Pittsburgh on Oct. 31, said the person who spoke on condition of anonymity because of the sensitivity of the situation.

The fourth-year QB revealed the break in his humerus bone — which runs from his shoulder to elbow — to Fox during the network’s pregame show.

Browns coach Kevin Stefanski did not get into any specifics on Mayfield’s injury but said it was “too far away” to know if the QB will be back next week.

Until he’s ready, Keenum showed he can keep the Browns going forward.

So did Johnson, an unlikely hero.

After Bridgewater’s 8-yard TD pass to Melvin Gordon brought the Broncos within 10-7 in the third quarter, Keenum directed a 13-play, 75-yard drive he capped with a 1-yard scoring pass to fullback Johnny Stanton IV.

Keenum made the biggest play on the drive, converting a fourth-and-3 play with a 5-yard scramble to Denver’s 1.

The 33-year-old, who last started for Washington two years ago, was excited about the opportunity to play, saying Wednesday he was “built for this” and Keenum showed he’s more than capable of filling in.

Browns receiver Jarvis Landry had five catches for 37 yards in his first action since missing four games with a sprained knee.

Landry was activated a few hours before the opening kick.

The Cleveland star receiver, who didn’t practice this week due to a shoulder injury, had a drop, got called for an illegal formation and was briefly out of the game with an injury — all in the first half.

Beckham bounced back with two receptions in the third quarter.