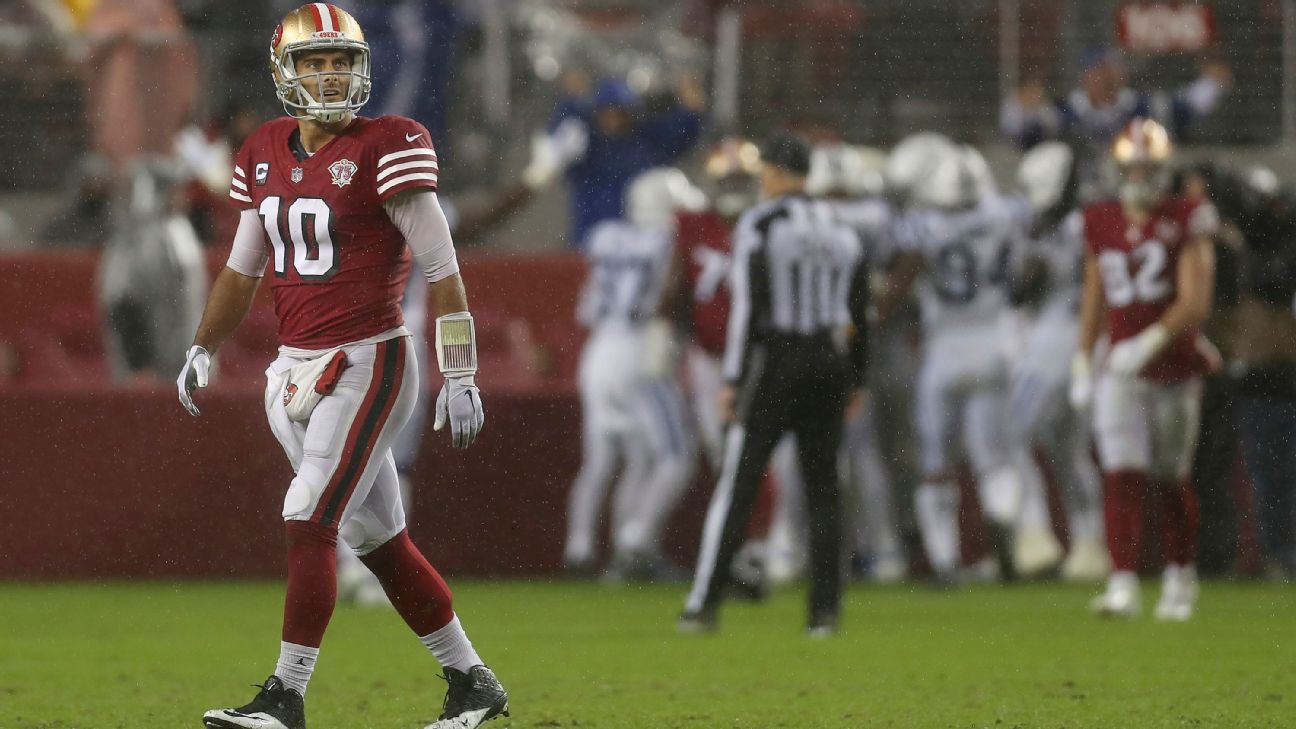 When Lance might take over for Garoppolo remains to be seen, but Niners coach Kyle Shanahan sounded more uncertain about his quarterback situation Sunday night than he has at any point this season.

On the heels of a 30-18 loss to the Indianapolis Colts that dropped the 49ers to 2-4, Shanahan was asked if Garoppolo will start next week against the Chicago Bears.

“I would guess so,” Shanahan said. “I’ll watch this tape and see if guys are healthy, first of all.”

A few moments later, Shanahan was asked what his process would be in deciding who his starting quarterback would be in Chicago.

“I have got a whole team to worry about,” Shanahan said. “I’m not just thinking about the quarterback situation right now. I’ll evaluate everything, see where our team’s at, see who gives us the best chance to beat Chicago and see what our options are … But we’ve got a lot of things to figure out.”

By “see what our options are,” Shanahan was referring, of course, to the statuses of Garoppolo and Lance, neither of whom has been the picture of health in recent weeks.

Against the Colts, Garoppolo returned from the strained and bruised right calf that he suffered against the Seattle Seahawks on Oct. 3.

Lance started the Oct. 10 loss to the Arizona Cardinals in place of Garoppolo but sprained his left knee in that game, which made him a pregame inactive Sunday night.

While Garoppolo was able to use the team’s Week 6 bye to get healthy enough to start against Indianapolis, Shanahan remains unsure when Lance will be good to go. The 49ers hoped Lance’s injury would last just a week or two, but he did not participate in practice last week and might still need time to heal before he could even be active again, let alone start.

Alas, Garoppolo is still dealing with his own injuries. After finishing 16-of-27 passing for 181 yards with a touchdown, a fumble and two interceptions Sunday night, Garoppolo acknowledged that his calf still bothered him throughout the game, though he said it wasn’t “hindering” him at all.

“It held up,” Garoppolo said. “Definitely felt it at times. But it sort of is what it is. All the guys out there, we’re all playing with something right now. It’s that point of the season.”

In addition to the quarterback situation, the 49ers must find more answers for what ails them in a hurry. Sunday night’s loss was San Francisco’s fifth straight to the Colts dating to 2005 and dropped the 49ers 4½ games behind Arizona in the NFC West.

On a wet, windy night at Levi’s Stadium, many of the same issues that have plagued the Niners all season continued to be problems. Namely, an inability to convert on third down (1-of-11), a negative-2 turnover differential and a continued penchant for defensive pass interference penalties. The Niners were called for five defensive pass interference penalties, with the Colts accepting three of them for 97 yards, pushing San Francisco’s league-leading total to 11.

All of it added up to another somber postgame locker room and Shanahan acknowledging that he deserves the criticism that comes with his team’s disappointing start.

“You lose four games in a row, I’m the head coach of this team, I expect it and I deserve it,” Shanahan said.