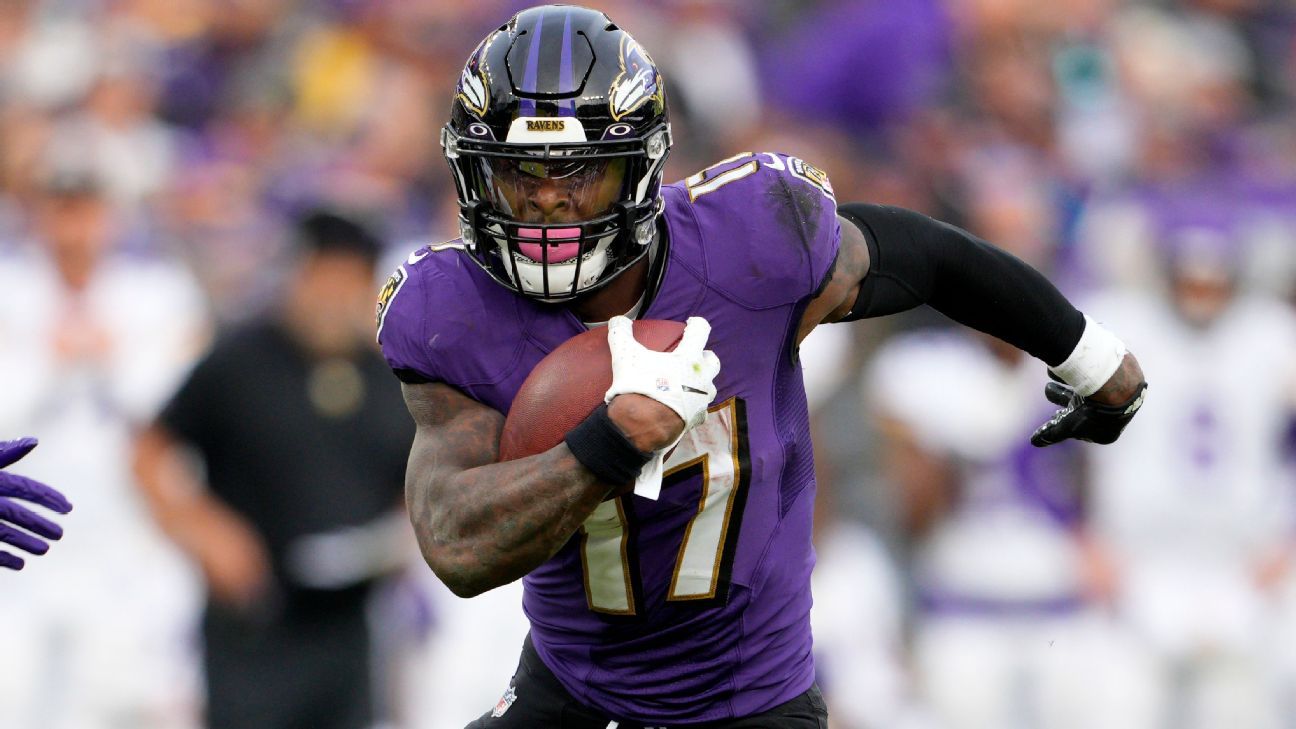 TAMPA, Fla. — Veteran running back Le’Veon Bell, who practiced with his new Tampa Bay Buccaneers teammates for the first time Wednesday, said he seriously contemplated retirement after going six weeks without playing football. Bell called it “one of the worst feelings in the world” as he waited for an NFL opportunity he wasn’t sure was ever going to happen again.

He also said that he wishes he had handled his 2018 holdout with the Pittsburgh Steelers differently.

“I’m not even gonna lie — I got to the point where I had thought about kinda calling it quits, just ’cause of the fact that it wasn’t working out for me the last couple spots I’ve been at,” said Bell, 29, who signed with the Buccaneers after Leonard Fournette suffered a hamstring injury Sunday against the New Orleans Saints, and after Giovani Bernard went on injured reserve with knee and hip injuries.

He even sent out a tweet to professional boxer Jake Paul, challenging him to a fight after Paul defeated Tyron Woodley with a one-punch knockout in Tampa on Saturday.

“It’s one of the worst feelings in the world, honestly,” Bell said of waiting to hear from teams. “Just knowing what I can do, how much I do got left, and the game that I love and playing my whole life — it’s tough when it’s really not going the way you envision it.”

But Bell couldn’t pass up an opportunity to play with seven-time Super Bowl-winning quarterback Tom Brady, to suit up for Bruce Arians and to reunite with former Steelers and “Killer B’s” teammate Antonio Brown in a quest to capture a Super Bowl that’s eluded him — although he came close as a backup with the Kansas City Chiefs last season.

“The last three or four years have definitely been tough,” Bell said. “I think it kind of humbled me in a real good way. It made me work so much harder. I know how bad I want it, to help a team win, and to still show people I’m still a great football player. I just think that will and desire and that last couple years of humbleness kinda helped me out.”

A two-time first-team All-Pro and three-time Pro Bowler with the Pittsburgh Steelers, Bell eclipsed the 1,000-yard rushing mark in three of his last four seasons in Pittsburgh. (He played in only six games in 2015 because of injury.) In 2017, he led the NFL with 321 carries for 1,291 yards and 85 catches for 655 receiving yards.

But when the Steelers opted to franchise tag him for the second consecutive year, he decided to hold out for the entire 2018 season, which cost him $14.5 million. He became a free agent after that season, signing with the New York Jets for four years and $52.5 million, with $35 million guaranteed.

Bell struggled in New York and found himself at odds with then-head coach Adam Gase. He was released in October 2020 after the Jets were unable to find a trade partner. He then signed a one-year deal with the Chiefs, rushing for 328 yards with 82 carries and two rushing touchdowns, along with 16 catches for 138 receiving yards. He joined the Ravens’ practice squad in 2021, and was activated in Weeks 4 and 6 before his release Nov. 16.

Still, Bell said he doesn’t regret the holdout. He feels it helped prolong his career by giving his body a chance to reset. But he wishes he would have handled it in a more private way.

“I don’t think I regret sitting out or the way anything went down,” Bell said. “Maybe more so having my name in the headlines and maybe drawing so much attention to it. That’d be the only thing I wish I could kind of do differently. But my decision and what I wanted to do at the time, I felt like, if I didn’t know what I knew now … and I could go back four years ago, five years ago, whatever it was — I probably would still do the same thing, because of like what I felt I was worth at that time.

“I don’t think I would change anything outside of just being in the media and talking on social media so much. I think I kinda would have been more quiet about it and just went about my business differently. But I don’t regret the way things went. It helped me become who I am today, so I don’t take anything back.”

Bell’s role in Tampa Bay will depend on how quickly he can grasp the offense, but the greatest void he can fill is as a pass-catcher and in pass protection, given it’s an area Ronald Jones has struggled in. It’s very similar to the system in Pittsburgh, where Arians previously served as the wide receivers coach and offensive coordinator before Bell’s arrival.

Bell believes he’s in good cardiovascular condition because of his boxing workouts. He also feels more confident when he cuts because his legs feel more stable. But he has to establish rapport with Brady, whom he did not have a previous relationship with.

Bell said Wednesday he was able to catch up with Brown in the training room and that Brown and Brady made him “feel welcome and at-home.”

“I seen Tom in the meetings — we were in the meetings so we couldn’t really talk — but once we got out here, he kinda pulled me to the side. He talked to me, let me know, like, ‘Hey, If you need anything, I mean anything, you know, ask me. Come to me before the coach.’ You know what I’m saying? Making sure that I’m comfortable,” he said.

“I’m glad he did that. You know, cuz he’s not a person I’ve ever like talked to off the field. I played against him a couple times. But I never really talked to him, so today was kinda like the first time I had a conversation to him. It was good. It went well.”

Arians said he’s hopeful that he can play Sunday at the Carolina Panthers. The Bucs need one more win to lock up the NFC South title.

“He’s been a good receiver in the past,” Arians said. “We’ll see what he can learn and what he can give us the next few weeks.”