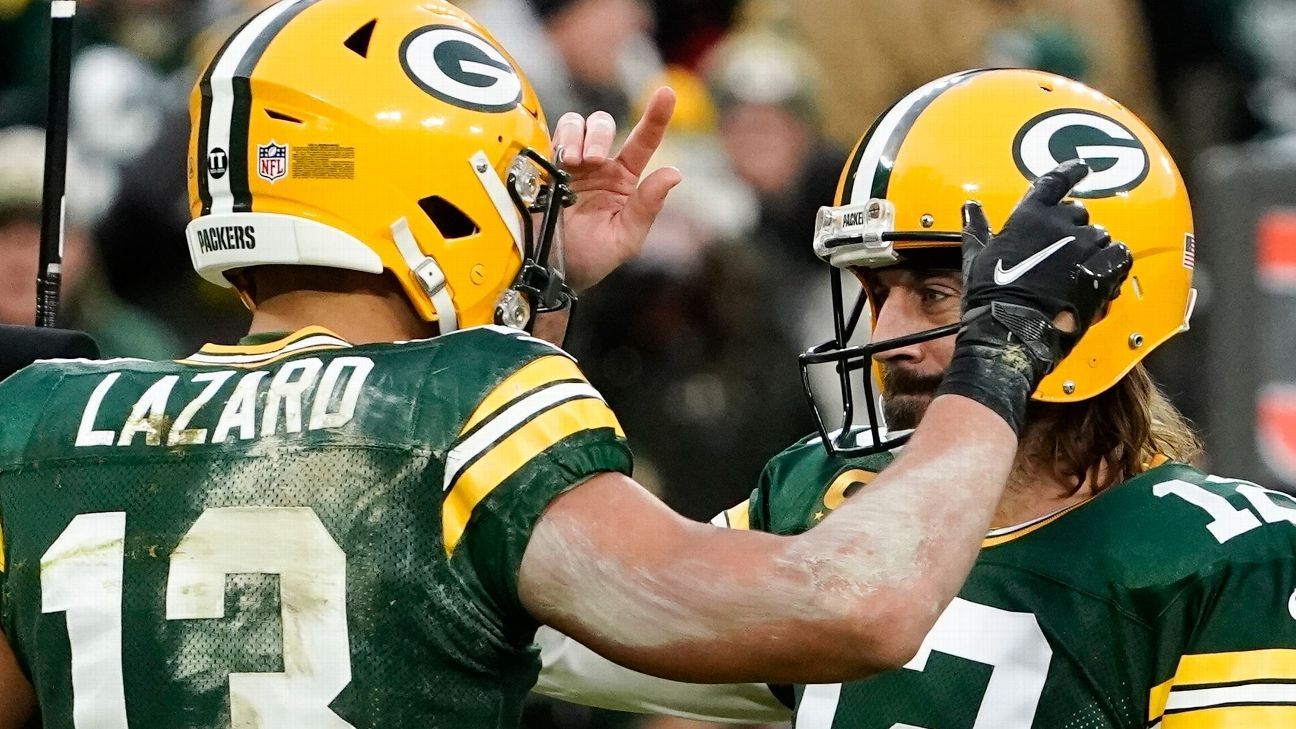 GREEN BAY, Wis. — They all wanted to catch it, and they all wanted to be the one to present the ball to Aaron Rodgers, but it was Allen Lazard who had the honor of catching the Green Bay Packers quarterback’s franchise-record-setting 443rd career touchdown pass.

It happened in the first quarter of Saturday’s 24-22 win over the Cleveland Browns at Lambeau Field, when Lazard took a short out and drove for the right pylon. History was made.

And after the record-breaking touchdown, the Packers played a video message from Brett Favre on the scoreboard. Favre congratulated Rodgers and then said he had one request.

“Go get us another Super Bowl,” Favre said.

Rodgers tied Favre’s franchise record of 442 touchdown passes last Sunday when he threw three in a 31-30 win over the Baltimore Ravens.

Another difference between the two is their interception totals. While Favre threw 286 picks in his Packers career, more than any player in the NFL regardless of team, Rodgers has just 93.

Favre blew away the previous franchise touchdown record of 152 held by Bart Starr. Then Favre set the then-NFL record for touchdown passes when he threw his 421st in 2007. Rodgers threw his first touchdown pass in 2007, the year before he became a starter. That was his only one in three seasons as Favre’s backup. The rest have come since he took over as a starter in 2008.

“I didn’t think a lot about that back in the day,” Rodgers said of the milestone this week. “I was just trying to kinda get to the next thing and thought how cool it would be to play five or eight years in the league and figure out what I’m gonna do next. Got to 10 and thought everything after that would be a pretty special deal, but yeah, 17 years, a lot of years starting, just have a lot of gratitude for all the people who had an impact on me during the journey. It’s been a great journey.”

Lazard felt like he might be the one in last week’s game, as well, and it appears his patience paid off.

“I had a chance on the second-to-last drive that we had,” Lazard said this week. “I think the wind caught it and it sailed out of the end zone. Yeah, I think anytime catching a touchdown is obviously a significant play in the game and everything. It means a lot to us individually, as a unit offensively. To be able to be a part of such a special record would be pretty cool.”

On the Packers’ next possession, after the record-setter, Rodgers threw No. 444. It went to Davante Adams for the 66th time those two have connected for a touchdown. That’s now the most by a quarterback-receiver combination in Packers history, breaking the previous mark held by Rodgers and Jordy Nelson.