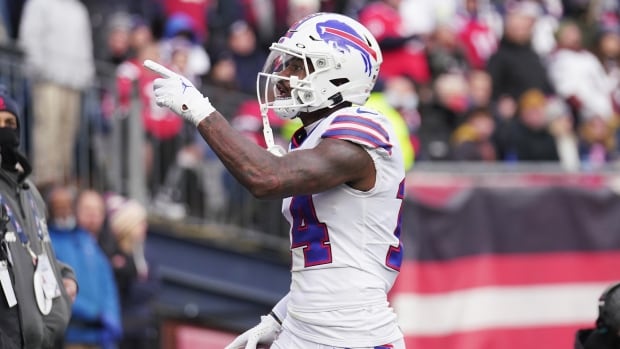 Josh Allen threw for three touchdowns and the Buffalo Bills hung on to beat the New England Patriots 33-21 on Sunday to vault themselves back into first place in the AFC East title race.

With the victory, Buffalo (9-6) now holds tiebreakers over the Patriots and Dolphins, and is in the driver’s seat to win its second straight division title.

Isaiah McKenzie stepped up in place of Bills receivers Cole Beasley and Gabriel Davis, who were both on the reserve/COVID-19 list, notching a career-high 11 catches, 125 yards and a touchdown. McKenzie’s big day came after the Bills shied away from using him even to field kickoffs during blustery conditions in Buffalo during their Week 13 loss to the Patriots.

The Bills were aggressive, going for it on fourth down three times in the first half, including a fourth-and-2 that helped set up a 12-yard pass from Allen to Stefon Diggs for a 17-7 lead. That grew to 26-14 early in the fourth quarter after running back Devin Singletary’s 2-yard touchdown run; Buffalo was denied on its 2-point conversion attempt.

The Patriots (9-6) got it to 26-21 with 7:37 to play on Damien Harris’ 8-yard TD run, his second of the game, but rookie quarterback Mac Jones struggled to find openings against the Bills’ top-ranked defence, ending his day making 14 of 32 passes for 145 yards and two interceptions.

Buffalo quickly faced third down on its next series before Allen hooked up with McKenzie for 15 yards along the sideline. The Patriots forced a fourth-and-1 on their own 34, but Allen was able to get outside for 8 yards.

The Bills were staring at third-and-10 with under four minutes to play when Allen came through again, this time creating space before flicking a pass to Diggs for 19 yards. Two plays later, Allen tossed a 2-yard touchdown pass to tight end Dawson Knox.

In Week 13, the Patriots dominated on the ground, grinding out 200-plus yards in their 14-10 win on a cold and wet night. Jones attempted only three passes in that first meeting, but got there in just two drives Sunday.

The Tampa Bay Buccaneers won their first NFC South title since 2007 on Sunday when Tom Brady threw for 232 yards and a touchdown and Antonio Brown made a grand return to the NFL in a 32-6 rout of the Carolina Panthers.

In his first game since Oct. 13 after missing eight games, Brown saw a prominent role on offense with Mike Evans and Chris Godwin sidelined by injuries, catching 10 passes for 101 yards while being targeted 15 times by Brady. Brown has been plagued by an ankle injury and was suspended three games for breaking COVID-19 protocols prior.

Vaughn broke two tackles and rambled for a 55-yard first quarter touchdown. Grayson, a COVID-19 replacement player elevated to the active roster this week, hauled in a 62-yard reception to set up Brady’s only TD pass, a 4-yarder to Cameron Brate.

Rex Burkhead ran for a career-high 149 yards and two touchdowns, and the Houston Texans took advantage of three turnovers to beat the Los Angeles Chargers 41-29 on Sunday with both teams missing more than a dozen players because COVID-19 protocols.

The Chargers’ playoff chances took a serious blow with the loss to the lowly, if recently improved, Texans. Outside linebacker Joey Bosa, running back Austin Ekeler, receiver Mike Williams and centre Corey Linsley were among the major contributors on the COVID-19 list for LA (8-7), which entered in second place in the AFC West.

Houston (4-11) had 16 players miss the game on the COVID-19 list but managed to win consecutive games for the first time this season. The Texans beat Jacksonville last week.

Burkhead had TD runs of 25 yards and 1 yard as the Texans, who entered the game ranked last in the NFL in yards rushing, ran for a season-high 189 yards. Rookie Davis Mills threw for 254 yards and two touchdowns.

The Chargers’ Justin Herbert threw for 336 yards with garbage-time touchdown and two interceptions. Justin Jackson ran for 64 yards and two touchdowns and had 98 yards receiving filling in for Ekeler, but his fourth-quarter fumble led to a Houston field goal that hurt LA’s comeback bid.

Brandon Powell returned a punt 61 yards for a touchdown in the third quarter to lift Los Angeles into the playoffs as the Rams pulled out a 30-23 victory over the Minnesota Vikings.

Sony Michel rushed for a season-high 131 yards and a score, Matt Gay made three field goals, and the Aaron Donald-led defence did its part, keeping the Vikings out of the end zone on two first-half trips inside the 10-yard line.

Matthew Stafford had his first three-interception game since Sept. 10, 2018, when he was picked off four times for Detroit against the New York Jets. But the Rams (11-4) still had more than enough to win their fourth straight game and pass Arizona (10-5) for first place in the NFC West.

Kirk Cousins had 315 yards on 27-for-38 passing with a touchdown to K.J. Osborn with 8:21 remaining that cut the lead to 27-20. But his interception in the end zone in the first quarter loomed large all afternoon.

Alexander Mattison filled in for COVID-19-absent Dalvin Cook and had 70 total yards and a score for the Vikings (7-8), who failed for the fourth time this season to push their record above .500. They lost control of the third and final NFC wild-card spot.

Joe Burrow’s franchise record-breaking 525-yard passing performance clearly meant something to the Cincinnati Bengals, who continued calling deep throws for him late in the fourth quarter with a 20-point lead against division rival Baltimore until the mark was secured.

Burrow was more interested in what the final score — 41-21 over the Ravens — meant for his team, which took over first place in the AFC North with two games left.

Burrow, who snapped Boomer Esiason’s team record of 522 yards, was 37 of 46 with two touchdown passes to Tee Higgins and one each to Tyler Boyd and Joe Mixon as the Bengals swept the Ravens for the first time since 2015. Cincinnati won 41-17 at Baltimore on Oct. 24.

The Bengals are having their best season since 2015, when they last reached the playoffs and were eliminated by the Pittsburgh Steelers in a wild-card game.

Tee Higgins had 12 receptions for a career-high 194 yards. Ja’Marr Chase caught seven for 125 yards, and Boyd had three catches for 85 yards.

Zach Wilson threw a touchdown pass and ran for another to outduel Trevor Lawrence, and the short-handed New York Jets used a goal-line stand at the end of the game to hold on and beat the Jacksonville Jaguars 26-21 on Sunday.

It was the fourth matchup of rookie quarterbacks taken with the first two picks in the draft — and the No. 2 selection came out on top.

A 26-yard run by the No. 1 pick got the ball to the 5, and he followed with a 4-yard pass to Marvin Jones. Lawrence spiked the ball to stop the clock to make it fourth-and-the-game.

But Lawrence’s pass to Jones fell incomplete — and the Jaguars were called for an illegal shift that the Jets declined, turning the ball over on downs. The Jets had 20 players on the COVID-19 list and played without coach Robert Saleh because he didn’t clear protocols after testing positive earlier in the week.

Wilson set a Jets record for a quarterback with 91 yards rushing, highlighted by a 52-yard score — the longest run by a QB in franchise history. He was 14 of 22 for 102 yards passing, including a TD pass to offensive lineman Conor McDermott.

Braxton Berrios returned a kickoff 102 yards for a touchdown, and Michael Carter ran for 118 yards on 16 carries for New York, which was led by tight ends coach Ron Middleton in Saleh’s absence.

Matt Ryan threw a tie-breaking, 12-yard touchdown pass to Hayden Hurst early in the fourth quarter and the Falcons held on late to beat the Detroit Lions 20-16 on Sunday to preserve their slim playoff hopes.

The Falcons improved to 7-2 in one-possession games, including four wins by no more than four points.

It was the first interception of the game for Boyle, who made his second career start as Jared Goff remained on the reserve/COVID-19 list. Boyle acknowledged he made the wrong read on Atlanta’s defence.

Jalen Hurts threw a touchdown to lineman Lane Johnson, linebacker Alex Singleton returned an interception for a score and the Philadelphia Eagles continued their late-season playoff push with a 34-10 win over the New York Giants on Sunday.

The Eagles (8-7) have won six of eight after opening the season losing five of seven and moved into the seventh playoff spot in the NFC. They could clinch a playoff berth with a win and some help next week.

The Eagles can only hope they don’t have to play the final two games without running back Miles Sanders after he left the game with an unspecified hand injury.

Hurts shook off a dismal first half and threw for 199 yards and two touchdowns to push the Eagles over .500 for the first time since they won the season opener.

The Eagles scored 31 points in the second half, none quite as cool as the 4-yard pass from Hurts to Johnson early in the fourth that made it 27-3. Johnson, the standout right tackle, reported as eligible and was left all alone when Hurts hit him for the easy score. Johnson, who had missed three games this season to address depression and anxiety, became the first Eagles lineman to score a TD since 2010.