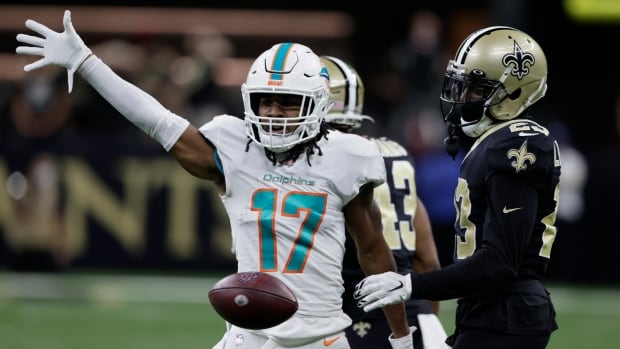 Rookie sensation Jaylen Waddle returned from the COVID-19 list to catch 10 passes for 92 yards and touchdown, and the Miami Dolphins beat the short-handed New Orleans Saints 20-3 on Monday night in New Orleans, becoming the first NFL team to win seven straight games after losing seven in a row.

Nik Needham intercepted Saints rookie quarterback Ian Book and returned it 28 yards for a touchdown to help to help Miami become one of four 8-7 teams — along with Baltimore, the Los Angeles Chargers and Las Vegas — in contention for one of the final playoff spots in the AFC.

Book started for the Saints (7-8) because of a COVID-19 outbreak that took 16 players off the active roster, including starting QB Taysom Hill and veteran backup Trevor Siemian.

With the Saints’ offensive line missing three starters, including both tackles, Book completed 12 of 20 passes for 135 yards, was sacked eight times and was intercepted twice.

The Saints’ defence helped keep the game within reach until Waddle scored on a 1-yard shovel pass from Tua Tagovailoa to make it 17-3 with 5:10 left in the third quarter.

Tagovailoa, who entered the game with an NFL-best 69.9 completion percentage, threw for 198 yards and the short TD. He also was intercepted by Marshon Lattimore.

Waddle returned to the lineup after missing Miami’s previous game because of a positive COVID-19 test. He has 96 catches this season, eclipsing New Orleans’ Michael Thomas for the second-most receptions by a rookie, and leaving him five short of Anquan Boldin’s rookie record of 101 catches in 2003.

Book got a roar of encouragement from the crowd when he first took the field and and Saints fans were cheering again two plays later when he completed his first career pass. Then they let out a collective gasp on his second pass — Needham’s pick-6.

Book’s next two series also lasted three plays each and ended on sacks. New Orleans didn’t get a first down until the second quarter, and that drive lasted five plays.

The Saints finally moved the ball on their fifth series, needing just four plays to pick up three first downs. A roughing-the-passer penalty on a 12-yard completion to Alvin Kamara moved New Orleans to the Miami 23, setting up Brett Maher’s field goal to make it 10-3.

Cam Jordan’s second sack of the game in the final minute of the second quarter forced Miami to try a 59-yard field goal, which Jason Sanders missed, keeping the Saints’ deficit at one touchdown at halftime.