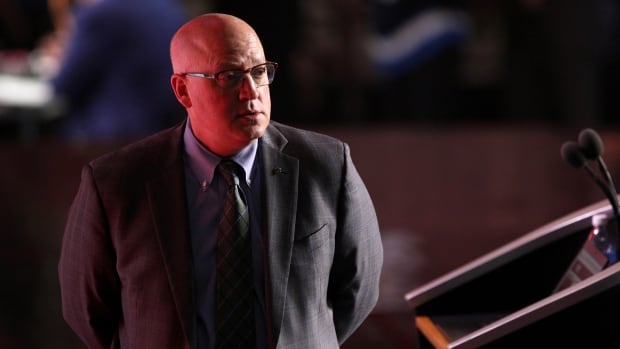 The NHL is following other leagues and the CDC by cutting COVID-19 isolation times to five days under certain conditions and where it is allowed by local laws.

The change went into effect Wednesday and applies only in the U.S. because of stricter pandemic regulations in Canada. The league has 25 teams based in the U.S. and seven in Canada and on Tuesday postponed nine games scheduled for north of the border because of attendance limits imposed by provincial governments.

Deputy Commissioner Bill Daly confirmed the new protocols, which were first reported by Daily Faceoff. They apply for 14 days, at which time league and players’ association officials will reconvene to review the situation.

Players, coaches and staff who tested positive for the coronavirus can return after five days if symptoms are gone or resolving themselves with a negative PCR test or two negative rapid test results taken more than two hours apart.

“I think that’s a good step,” Nashville Predators forward Filip Forsberg said on a video call. “Obviously testing will still be a regular thing, I’m sure, and that’s something that we dealt with all last year, so we’re used to that. But I think that’s the way to do it as long as we can keep everything in the way it’s been, which has been pretty safe to me.”

The 10-day isolation requirement remains in Canada. The NBA and NFL previously reduced to six and five days, respectively, after the U.S. Centers for Disease Control and Prevention issued new guidance.

Hockey players this week had expressed a desire for shorter isolation times. Daily testing and enhanced protocols, including mask-wearing at team facilities unless on the ice for games or practices, are in effect through at least Jan. 7.

The league has postponed 80 games so far this season, counting the nine in Canada because of crowd restrictions in the provinces of Quebec, Ontario and Manitoba. Another game, scheduled for Jan. 12 between the Canadiens and Bruins, was moved from Montreal to Boston, where fans are permitted.

“We can confirm there has been a COVID outbreak within Canada’s bobsleigh team who remained in Latvia during the holiday break to minimize travel and prepare for this week’s World Cup races,” the organization said in a statement Wednesday.

“The health and safety of all athletes, teams, staff and communities where we live, train and compete is always our first priority.

“[We have] robust health and safety protocols in place under the guidance of federal, provincial, and local public health officials that we continue to follow in our return to sport.”

Canada’s bobsled team had spent the holiday break in Latvia to minimize travel ahead of the upcoming World Cup event in Sigulda.

The skeleton team has no positive COVID-19 cases.

The statement said affected individuals are in quarantine and following all of the required protocols in place to protect themselves and the community at large.

“Our focus remains now on monitoring and looking after everybody in our group that’s been affected,” said the Bobsleigh Canada Skeleton statement.

Bobsleigh Canada Skeleton said it will not release any further information about the people affected to respect their privacy.

The World Cup event in Latvia is a double two-man race, with two more weekends of full competition scheduled in Winterberg, Germany on Jan. 8 and 9 and then in St. Moritz, Switzerland on Jan. 15 and 16.

Vancouver Canucks forwards Brock Boeser and Phillip Di Giuseppe and a member of the team’s support staff have been added to the NHL’s COVID-19 protocol list hours before the team was scheduled to return to action after an extended break.

The Canucks were set to face the Ducks in Anaheim, Calif., on Wednesday night.

They haven’t played since a 5-2 win over the San Jose Sharks on Dec. 16. gave them a sixth straight win under new head coach Bruce Boudreau.

The Vancouver Canucks announced today that forwards Brock Boeser and Phillip Di Giuseppe, in addition to one support staff member in Vancouver have been placed into the NHL’s COVID-19 protocol.

Forward Alex Chiasson is the only other member of the Canucks currently in protocol.

Boeser has nine goals and 17 points in 28 games this season, including points in six of eight games this month.

Di Giuseppe has 16 points in 19 games with the American Hockey League’s Abbotsford Canucks this season.