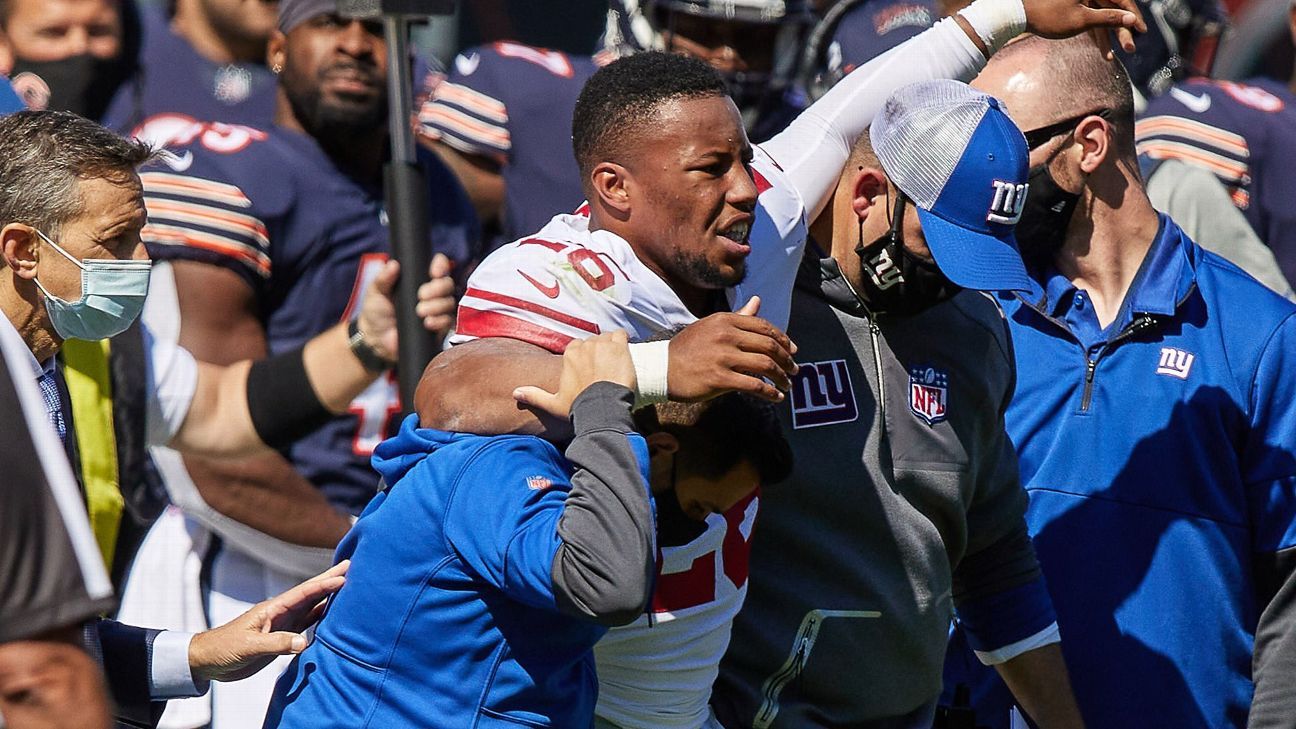 EAST RUTHERFORD, N.J. — This Sunday will be Saquon Barkley‘s first game back at Soldier Field in Chicago, where he tore the ACL in his right knee just over 15 months ago. Not that he’s trying to think about the moment that everything changed.

Closure returning to the spot that may have altered the trajectory of his career? Nope. Barkley is not looking at it that way either. He’s trying, at all costs, to not contemplate the ‘what ifs’ of the situation anymore.

“I try not to think about it,” Barkley said ahead of his struggling New York Giants facing the Chicago Bears on Sunday. “But it happened. I really don’t try to think about it, I guess, probably more so last year [I did], but this is a whole different season.”

There really wasn’t much to the injury that occurred in Week 2 of the 2020 season and costs Barkley the final 14 games. He was running to the right sideline when his right knee gave out while he was trying to plant during a tackle by safety Eddie Jackson.

Barkley has not been the same player since. He has rushed for 461 yards and two touchdowns on 130 carries this season.

“No, I’m not thinking like, ‘I hate the field,'” Barkley said on Wednesday. “I’m excited that I’m healthy enough to be able to go out there and be able to play another game. Like I said, you never know when these opportunities are going to be taken away from you. That’s my whole mindset is cherish these last two games that we have and go out there and try to finish on a high note.”

It hasn’t been a great season for Barkley and the Giants (4-11). He started slowly coming off the serious injury and, just when he appeared to be regaining some of the explosion that made him Offensive Rookie of the Year, he stepped on one of the feet of Dallas Cowboys cornerback Jourdan Lewis in Week 5. An ankle injury sidelined him the next four games.

That injury is admittedly still lingering. Barkley, who is tied for last in the NFL among qualifying running backs at 3.5 yards per carry, didn’t practice Wednesday. It has become a weekly maintenance issue to keep him out of the opening practice.

But Barkley said afterward there is no thought of shutting things down. The Giants don’t see any reason for that either.

“I know Saquon has been battling through a number of things this year,” coach Joe Judge said earlier this week. “Came off a traumatic injury last year — that’s a tough recovery. He’s dealt with a number of other things, as well. The ankle in the Dallas game, that’s really been lingering throughout the year. … He’s dinged up in a lot of ways, as most of the players in the NFL are this time of year. No one’s really 100 percent, but he’s battling through a lot of things for us.

“In terms of the long-term question for the rest of the year, no one on our medical staff has talked to me about anything related to that at this point.”

Barkley still believes he has something to play for. After Chicago, the Giants close with an NFC East matchup with the Washington Football Team.

“You’ve just got to have heart. That’s what we have to have,” Barkley said. “That’s what we’ve got to hang our hat on. It’s heart. It’s the name on the back of your jersey. I think [offensive assistant] Jody [Wright] said it last week to me and [running back Devontae Booker] and a couple of guys, like, there’s going to be some little kid in that stands that has never seen you play before, so you’ve got to take all those things into account too.

“Obviously, the season hasn’t gone the way we would like by any means, but we’ve just got to go out there and fight for each other, too. That’s another thing — heart, pride, your last name, those little kids that are still watching, and for each other.”

It has been a rough year for the No. 2 overall pick in 2018, and the frustration seems to be building. Barkley was terse at times during the Zoom news conference on Wednesday. He was unavailable Sunday after the game and Monday during a conference call despite repeated requests following an embarrassing offensive performance in a 34-10 loss to the Philadelphia Eagles.

Barkley said Wednesday it was a “timing” thing, though his face and body language seemed to indicate differently.

But Barkley reiterated that he hopes to remain with the Giants for the long term — that these final two games of the season won’t be his last in New York. He is set to play on the fifth-year option of his rookie contract next season.

Barkley, 24, said he isn’t even thinking about the possibility of this being the end of the first chapter of his professional career.

“Like I said, with these last two games, especially coming up with Chicago, try to finish on a high note and play for each other.”