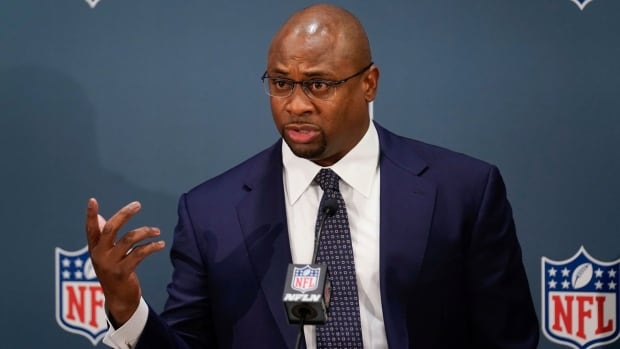 “We should be creating a workplace culture that doesn’t require mandates to interview people of colour and minorities,” Vincent told The Associated Press on Thursday. “They should be doing the right thing for the right reasons, not because there’s a policy.”

The NFL entered another hiring cycle this week when teams looking for a head coach were allowed to start interviewing candidates on Tuesday. The Rooney Rule requires teams to interview at least two external minority candidates for general manager/executive of football operations positions, head coach and all coordinator roles. At least one of those interviews must be held in-person for any head coach or general manager opening.

‘Historic progress for minority hiring in 2021’

Since the Rooney Rule was implemented in 2003, 27 of 127 head coaching jobs have gone to minorities. This year, only one Black head coach was hired for seven openings, but 13 Black coordinators and three general managers got jobs.

“Except for the head coaching positions, overall there was significant and historic progress for minority hiring in 2021,” Vincent said. “Statistically, 47% of interview requests for coaches, coordinators and GMs were for minority candidates, and 35% of open hires went to minorities, nearly doubling 2020 in both interviews and hires.”

Vincent, a five-time Pro Bowl cornerback who played from 1992-2006 and a former president of the NFL players union, is the league’s executive vice president of football operations. He wants to see minority hiring become a standard practice in the league and for all businesses and companies.

“In 2003, the Rooney Rule was a necessary tool toward promoting fair and equitable hiring,” he said. “Now we are reimagining hiring practices taking into consideration tenure, impact, stability, and financial risk reduction resulting in better informed decisions. It’s not about percentages, it’s about intentionally normalizing fairness, inclusivity and opportunity as an extension of football for all.”

There are three Black head coaches in the NFL: Pittsburgh’s Mike Tomlin, Miami’s Brian Flores, and Houston’s David Culley. Other minority head coaches are Ron Rivera of Washington and Robert Saleh of the New York Jets.