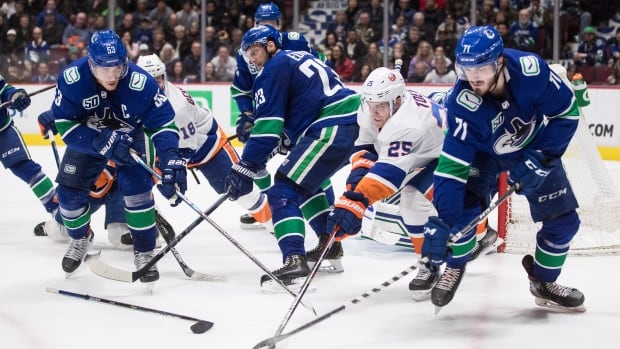 The league said the games will be rescheduled when the restrictions are either eased or lifted.

A game between the New York Islanders and the Seattle Kraken on Jan. 4 has also been postponed due to the Islanders having three other road games pushed back.

The NHL did not announce any further postponed dates for the Toronto Maple Leafs, who are scheduled to host Ottawa on Saturday and Edmonton on Wednesday.

Friday’s announcement comes three days after the NHL postponed nine games in Canada due to capacity limitations. The NHL now has had a total of 89 games postponed this season.

The Ontario government limited capacity at large indoor venues to 1,000 people on Thursday. Major League Sports and Entertainment, which owns the Maple Leafs and the NBA’s Toronto Raptors, has said its games will be held without fans while that restriction is in place.

The Montreal Canadiens are not currently scheduled to play at home again until Jan. 15. A four-game Canadiens homestand between Tuesday and Jan. 10 had already been postponed

The Ottawa Senators have added forwards Tyler Ennis and Josh Norris to the NHL’s COVID-19 protocol list, the team announced on Friday.

The Franchise also called up forwards Clark Bishop and Logan Shaw from the Belleville Senators of the American Hockey League to the team’s taxi squad.

The Senators returned to practise on Friday morning after cancelling Thursday’s session for precautionary reasons.

New Jersey coach Lindy Ruff tested positive for COVID-19 hours before the Devils’ game against the Edmonton Oilers and was isolated from the team.

The Devils made the announcement Friday, roughly 45 minutes after Ruff did not show up for a pregame news conference. When the conference started, assistant coach Alain Nasreddine walked in and said he would be running the team.

Nasreddine, who usually handles the defencemen in the game, said Ruff was going to stay in the Prudential Center for the contest. He said the two would be in communication during the game.

The 61-year-old Ruff was hired as Devils coach for the pandemic-shortened 2020 season and the team missed the playoffs. New Jersey is currently in seventh place in the Metropolitan Division.

Nasreddine coached the Devils on an interim basis for 43 games during the 2019-20 season after John Hynes was fired in early December. He posted a 19-16-8 record. Ruff kept him on his staff.

Also Friday, Chicago goaltender Kevin Lankinen was held out of practice because of COVID-19 protocol. With Marc-Andre Fleury already in the protocol, Collin Delia could make his first NHL start of the season when Chicago visits Nashville on Saturday.

The NBA began Friday with about 120 players in various stages of the protocols, with seven other head coaches sidelined, dozens of other staffers, including assistant coaches, athletic trainers, media relations staff and more.

The league has a 97% vaccination rate among players, 100% among coaches, and at least two-thirds of the league has received a booster shot. The NBA has postponed 11 games in recent weeks, while often changing its protocols — the latest moves designed to potentially get players who test positive back on the floor more quickly than has been the case.

The virus outbreak hasn’t just sent NBA teams looking for help from the G League. The NBA refereeing corps has had to do the same.

A trio of G League officials — Tyler Mirkovich, Clare Aubry and Pat O’Connell — were assigned games on Friday, the NBA debuts for all three. It was the first time that the NBA had to call up G League officials to work games this season.

Mirkovich was assigned Phoenix at Boston, Aubry got Atlanta at Cleveland and O’Connell was picked for New York at Oklahoma City.

None of the three G League refs called up Friday has even worked an NBA preseason game. But with about one-third of the league’s referees unable to work right now, mostly because of coronavirus-related reasons and a few because of injury, the NBA had no choice but to seek help.

Vikings lose Cousins to COVID list before game vs. Packers

Kirk Cousins has never missed a game in the NFL to injury.

His first unplanned absence, due to COVID-19, could not have come at a worse time for the Minnesota Vikings.

The Vikings placed their starting quarterback on the COVID-19 reserve list on Friday, two days before their most important game of the season at Green Bay.

Cousins, who is unvaccinated, couldn’t be cleared in time to play even if he were feeling fine. The NFL recently reduced the required quarantine period to five days for asymptomatic players.

The Vikings (7-8) are one game out of the last wild-card spot in the NFC with two weeks to go. The Packers (12-3) are in control of the top seed and a first-round bye.

The Vikings activated backup quarterback Sean Mannion from the COVID-19 reserve list, putting the seventh-year veteran in line to start at frigid Lambeau Field on Sunday night. Rookie Kellen Mond, who was drafted in the third round, has not developed quickly enough this season to be considered.

A continuing continuing coronavirus outbreak at Newcastle has led to Sunday’s game at Southampton being postponed, the Premier League said Friday.

Newcastle’s previous game against Everton scheduled for Thursday had also been called off.

The Premier League said a combination of COVID-19 cases and injuries meant 19th-place Newcastle does not have the required 13 outfield players and one goalkeeper available to face Southampton at St. Mary’s Stadium.

The league said in a statement that it “was able to make its decision in advance of the fixture to give clarity to the affected clubs and their fans.”

It brings the total to 18 Premier League games postponed in the past three weeks, including last-place Norwich’s trip to Leicester on Saturday.

Meanwhile, Liverpool coach Juergen Klopp said Friday that three of his players have tested positive ahead of Sunday’s game at title rival Chelsea.

He did not name the trio and remains hopeful the game in London will go ahead.

The French league postponed the game between Angers and Saint-Etienne on Jan. 9 because of a high number of coronavirus cases in the Angers squad.

Angers asked for the postponement on Thursday, saying there were 19 confirmed cases among its squad of 30 players and that more than 10 are not authorized to play again until Jan. 10. Angers added that a further five staff members have the virus.

Angers had five players out with COVID-19 when it lost 4-1 at Montpellier on Dec. 22 before the winter break.