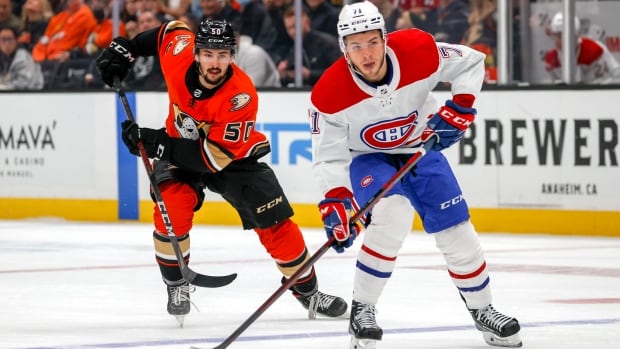 With almost two weeks until their next game, and their list of players in COVID-19 protocol growing, the Montreal Canadiens are pausing activities.

The news came shortly after the Canadiens lost 5-2 to the Florida Panthers in Sunrise on Saturday.

Montreal dressed only 11 forwards and five defencemen for the game. Forward Jake Evans and defenceman Alexander Romanov were added to the protocol list just hours earlier giving the Habs 16 players now in isolation.

“Given all the new positive cases arising daily, and for the health of our players and staff, we feel that pausing our activities is necessary at this time. This pause will give our players the time they need to recover so that we can continue the season safely,” Jeff Gorton, the Canadiens’ executive vice-president of hockey operations, said in a statement.

The pause in operations at Bell Centre also applies to the Laval Rockets, their American Hockey League team.

The Canadiens at least have time to recover. They were scheduled to start a five-game homestand on Tuesday; the Canadiens had games against Washington, Toronto, Buffalo and Columbus postponed because of attendance restrictions put in place by government officials. They won’t play now until Jan. 12 at Boston in a game that was originally scheduled to be held in Montreal.

Between coronavirus-related shutdowns, the NHL’s holiday break and the upcoming postponements, Montreal is in the middle of a stretch where it will play only three games in a 26-day span.

The Vancouver Canucks also announced that forward Jason Dickinson has been placed on the protocol list prior to the team’s game against the Seattle Kraken.

The Lethbridge Hurricanes paused team activities on Saturday due to a COVID-19 outbreak.

The Western Hockey League announced that Lethbridge has 14 players on the league’s COVID-19 protocol list because they either tested positive for the virus or exhibited symptoms. Saturday’s game at Calgary and Sunday’s home game against Swift Current have been postponed.

The pause in action also means there will be no one-ice practices nor off-ice training pending further test results.

Numerous junior hockey teams have been impacted by the latest surge in cases. The Quebec Major Junior Hockey League announced on Friday it was extending its holiday break until Jan. 14th due to rising cases. The league was originally scheduled to resume on Jan. 7 after starting its break on Dec. 18.

The IIHF world junior championships in Alberta were cancelled earlier this week due to cases on several teams.

NBA calls up another G-League referee

Another G League referee was called up by the NBA to work a game on Saturday and another head coach entered the league’s health and safety protocols as it continued finding ways to play through the latest coronavirus outbreak.

Ref Sha’Rae Mitchell was assigned the San Antonio-Detroit game. She becomes the fourth G League referee called up in a span of two days — three others worked games on Friday — and is now the 15th woman in league history picked to work a regular-season game.

Mitchell has worked in the G League since 2018. Her call-up comes as the NBA’s referee corps continues dealing with several officials who have either virus-related issues or injuries. So the refs, like most teams, have looked to the G League for help.

NBA teams saw 544 players get into at least one game in December alone, the most for any month — and any previous season — in league history. The single-season mark entering this year was 540, set last season; the NBA’s total this season entering Saturday was 567.

The league has had 11 head coaches in protocols at times this season, with the latest entry coming Saturday when Atlanta’s Nate McMillan joined the list. He’s the eighth head coach currently in protocols.

Seven Monaco players have tested positive for the coronavirus, the club said Saturday on the eve of its French Cup game.

The match at second-tier Quevilly-Rouen is still set to go ahead on Sunday.

Monaco said none of the seven players show any worrying signs and are isolating.

There are 12 other French Cup games scheduled for Sunday, with title-holder Paris Saint-Germain in action on Monday night at third-tier Vannes.