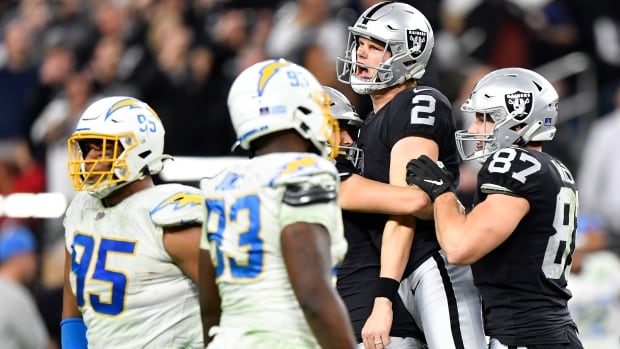 Daniel Carlson’s 47-yard field goal as time expired in overtime lifted the Las Vegas Raiders past the Los Angeles Chargers 35-32 on Sunday night for their first playoff berth since 2016.

And they eliminated their AFC West rivals in the process.

Carlson, three times the AFC special teams player of the week this season, kicked five field goals in the game, including two in overtime.

Derek Carr completed 20 of 36 pass attempts for 186 yards, including two touchdowns. Hunter Renfrow hauled in two touchdown passes, while Josh Jacobs ran for 132 yards on 26 carries, including one score.

The Raiders, who had arguably more offseason and in-season distractions than any team, overcame multiple adversities and return to the playoffs for only the second time since losing to Tampa Bay in the 2003 Super Bowl.

Calm as can be on what could have been his final pass, Ben Roethlisberger was right on target, finding Ray-Ray McCloud over the middle on fourth down to set up Pittsburgh for the winning field goal in overtime.

Roethlisberger delayed his retirement for a little longer, guiding Pittsburgh to a 16-13 win over the Baltimore Ravens on Sunday that left the Steelers on the verge of an improbable playoff berth. Then they had to sweat out a night game between the Chargers and Raiders. Any result other than a tie would put Pittsburgh in the postseason, but those two teams were indeed deadlocked until Las Vegas kicked a field goal at the end of overtime to win 35-32.

Hours earlier, Chris Boswell made a 36-yard field goal with 1:56 remaining to win the game for Pittsburgh. At the time, the Steelers (9-7-1) didn’t sound too worried about the possibility that a Chargers-Raiders tie could still knock them out.

Both Baltimore and Pittsburgh had slim playoff hopes coming in. The Steelers needed to win and have Indianapolis lose to Jacksonville to have any chance of extending Roethlisberger’s career with a postseason appearance. The Ravens needed a win, a loss by the Colts — and losses by the Dolphins and Chargers later in the day.

The most unlikely part of those scenarios — Indianapolis losing to lowly Jacksonville — actually happened. The crowd in Baltimore, which included plenty of towel-waving Pittsburgh fans, roared its approval when highlights of that game were shown. The Jaguars prevailed 26-11 and were in control for much of the second half.

The Steelers and Ravens (8-9) would have both been eliminated if their game had ended in a tie, so it was no surprise when Pittsburgh went for it on fourth-and-8 from the Baltimore 41 with 2:28 left in OT. McCloud made the catch for a 10-yard gain.

After the winning field goal, Roethlisberger held up his fist in celebration and went slowly to the middle of the field to commiserate with Ravens linebacker Justin Houston.

Latavius Murray put the Ravens ahead 10-3 with a 46-yard touchdown run in the third quarter, but Baltimore lost its sixth straight game to end the season. Five of the losses in that skid were by three points or fewer.

The Buffalo Bills clinched their second consecutive AFC East title after Devin Singletary scored twice in the final 8:21 in a 27-10 win over the New York Jets on Sunday.

The Bills (11-6) enter the playoffs as the conference’s third seed, but had to await the outcome of the late game between the Los Angeles Chargers and Las Vegas Raiders to determine who they’ll host in the wild-card playoff round next weekend.

The Bills actually moved up a spot in the conference standings, jumping ahead of Cincinnati after the Bengals (10-7) lost to Cleveland earlier in the day.

The Bills limited the the Jets to a franchise-low 53 yards of total offence and four first downs — the fewest allowed by Buffalo in franchise history. Buffalo also sacked Jets rookie Zach Wilson nine times, the most by Buffalo since getting 10 in a 23-0 win over Washington on Oct. 20, 2011.

The outcome, however, wasn’t decided until the final quarter on an afternoon in which wind gusts of up to 30 mph played havoc with the passing and kicking games.

Bucs down Panthers to earn NFC’s No. 2 seed

Tom Brady topped 5,000 yards passing for the second time in his career and the Tampa Bay Buccaneers set a franchise record for regular-season victories with a 41-17 win over the Carolina Panthers on Sunday.

Brady completed 29 of 37 passes for 326 yards and three touchdowns before taking the last half of the fourth quarter off, finishing with a career-best 5,316 yards passing and a Bucs single-season record 43 TD passes for the defending Super Bowl champions.

Mike Evans caught two of Brady’s TD passes, giving him a club-record 14 scoring receptions this year. He also became the first player in NFL history to begin a career with eight consecutive seasons with at least 1,000 yards receiving.

Tampa Bay (13-4) broke the club record for victories in a regular season set in 2002 and also earned the No. 2 seed in the NFC with the Rams losing to the 49ers in overtime. The Bucs will host the Philadelphia Eagles next week.

The San Francisco 49ers clinched a playoff spot with a 27-24 overtime victory over the NFC West champion Los Angeles Rams on Sunday thanks to Robbie Gould’s 24-yard field goal with 2:45 left in overtime and a game-ending interception by Ambry Thomas.

Jauan Jennings caught a 14-yard touchdown pass from Jimmy Garoppolo with 26 seconds left in regulation for the 49ers (10-7), who are postseason-bound for only the second time in eight years.

San Francisco rallied from a early 17-point deficit for their sixth consecutive win over the playoff-bound Rams (12-5), who won the division title anyway thanks to Seattle’s victory over Arizona.

Sixth-seeded San Francisco will play at Dallas next week, while the fourth-seeded Rams will host the Cardinals in the first playoff game in SoFi Stadium history.

Deebo Samuel rushed for a touchdown and threw a scoring pass to Jennings for the Niners, who made a deliberate 69-yard drive to open overtime. The Rams got the ball back, but Thomas picked off Matthew Stafford’s long throw down the Rams’ sideline.

San Francisco now has its longest winning streak in this rivalry since the 1990s.

Jaylen Waddle had a touchdown grab and set the NFL record for receptions in a rookie year, Duke Johnson rushed for 117 yards and the Miami Dolphins finished their season by defeating the playoff-bound New England Patriots 33-24 on Sunday.

Xavien Howard returned an interception for a touchdown and Johnson had a touchdown run for Miami (9-8), which finished with a winning record for the second consecutive season and once again didn’t have a playoff berth to show for it.

Brandon Bolden two touchdowns — one rushing, one receiving — for the Patriots (10-7), who are headed to the playoffs as a wild card. But they were swept by the Dolphins for the first time since 2000 and the outcome handed the AFC East title to the Buffalo Bills, whose game against the New York Jets had not gone final when the Patriots-Dolphins game ended.

New England needed a win over Miami to keep AFC East hopes alive. The Patriots have played in wild-card games before under coach Bill Belichick — but have never been to the playoffs in the Belichick era as a wild card. All 17 of the previous playoff appearances in his years there have come after a division title.

Ryan Tannehill tied a career-high with four touchdown passes to help the Tennessee Titans clinch the top seed in the AFC with a 28-25 win over the Houston Texans on Sunday.

The 12-5 Titans, who secured their second straight AFC South title last week, have the No. 1 seed in the AFC for the third time since leaving Houston in 1997 and first since 2008. They also have a first-round bye.

Tannehill threw three touchdown passes in the second quarter to put the Titans up 21-0 at halftime.

But the Texans (4-13) came alive in the second half, scoring 18 unanswered points to get within 3 before Julio Jones caught his first touchdown pass of the season on a 3-yard grab that made it 28-18 with about seven minutes remaining.

Houston cut the lead to 3 again when Danny Amendola’s second touchdown reception of the game made it 28-25 with 4 1/2 minutes to go. Tennessee got a first down on third-and-2 with about three minutes left and ran out the clock to secure the victory.

Russell Wilson threw three touchdown passes, Rashaad Penny ran for 190 yards and a touchdown, and the Seattle Seahawks spoiled a shot at the NFC West title for the Arizona Cardinals by beating them 38-30 on Sunday.

It was a back-and-forth game supplemented by a healthy dose of scoreboard watching. The Cardinals (11-6) were still in the running for the NFC West title with a win, especially when the 49ers beat the Rams.

In the end, the scoreboard’s results were moot. The Cardinals couldn’t take care of business against the Seahawks and will settle for the No. 5 seed after starting the season with a 7-0 record.

Arizona is 4-6 since that hot start, including losing four of its last five. The Cardinals will play at the Rams in the wild-card round.

Seattle finishes 7-10 and won’t be in the postseason for just the second time in the past 10 years. Wilson, playing potentially his final game with the Seahawks, finished with 238 yards passing.

Colts fall to Jaguars with playoff berth on the line

The Indianapolis Colts badly botched a chance to secure an AFC wild-card spot by losing at Jacksonville 26-11 Sunday in the “clown game,” their seventh consecutive road loss to the Jaguars.

NFL rushing champion Jonathan Taylor was held to 77 yards, Carson Wentz turned the ball over twice — leading to 10 points — and Indy (9-8) did little to stop the woeful Jaguars (3-14).

The Colts looked more like the ones who should have been decked out in giant bow ties, face paint and colorful wigs and suspenders.

With a playoff berth on the line, Indianapolis was a no-show on an 80-degree day in Jacksonville.

The 15-point outcome could have been a bigger blowout had the Jags scored touchdowns instead of settling for two chip-shot field goals from inside the 5-yard line. Nonetheless, Jacksonville experienced breathing room in a game for the first time all season.

And they still managed to lock up the No. 1 pick in the NFL draft for the second straight year because Detroit stunned Green Bay.

The Denver Broncos are looking for a new head coach to lead them out of a six-year playoff drought and a half decade of losing seasons that marks the most protracted plunge by a Super Bowl champion in NFL history.

The Broncos fired Vic Fangio after he went 19-30 over three years, including 7-10 this season despite having one of the easiest schedules and the highest-paid defence in the league.

The Broncos are the first team in league history to follow a Super Bowl championship with six straight non-playoff seasons, half of which came under Fangio’s watch.