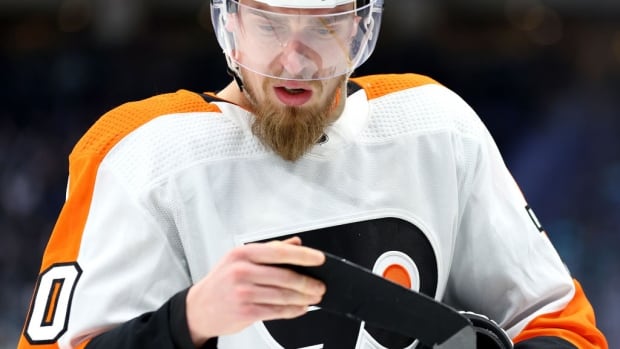 Tuesday night’s scheduled game in Philadelphia between the Flyers and Carolina Hurricanes was postponed due to COVID-19 issues with the Flyers.

It is the seventh postponed game for Carolina and the fourth for Philadelphia.

The Flyers put Rasmus Ristolainen on the NHL’s COVID-19 protocol list on Tuesday, a day after fellow defenceman Justin Braun was added. Captain Clade Giroux now is off the list, but defenceman Ivan Provorov and forward Travis Konecny remain in the protocol.

Both teams are scheduled to return to action on Thursday — the Hurricanes at home against the Columbus Blue Jackets, the Flyers on the road against the Boston Bruins.

Trotz, 59, missed the team’s 3-2 overtime win against the Edmonton Oilers on Jan. 1 following the death of his mother.

The Islanders have not played since then and are scheduled to return to the ice Thursday night at home against the New Jersey Devils.

The second leg of the QMJHL Cup was scheduled to be held Feb. 3-6 in Dartmouth, N.S., but will not take place.

The annual event provides prospects a chance to showcase their talents ahead of the league’s entry draft.

QMJHL director of hockey operations Pierre Leduc said in a statement that the Omicron variant has created a lot of uncertainty and the last thing the league wants to do is jeopardize the safety of players and staff.

The third and final stage of the QMJHL Cup is set to be held April 27 through May 1 in Boisbriand, Que.

The event will feature 120 prospects, including 80 players from Quebec and 40 from the Atlantic provinces.

Bradley Beal is out for Washington’s game Tuesday night against Oklahoma City after entering health and safety protocols for the second time in less than three weeks.

Beal entered the protocols Dec. 23 and returned after a week. He said then that he didn’t have COVID-19 and the absence was due to contact tracing.

Beal, who missed a chance to play in the Olympics last year after testing positive, was unvaccinated when the season began. When he returned late last month, he said he’d always kept an open mind about receiving the vaccine and decided to do so for family reasons.

Coach Wes Unseld Jr. said Tuesday he thought a test from Monday was flagged, but he didn’t want to say with certainty. He said Beal would need two consecutive negative tests to exit protocol.

The Wizards play again Wednesday night, at home against Orlando.

The Big East has announced that No. 23 Providence’s game at Creighton on Tuesday night has been cancelled because of COVID-19 issues in the Friars’ program.

The conference office will attempt to reschedule the game.

This is the third Big East game Creighton has had called off because of COVID-19 in opponents’ programs.

Providence had a game against Georgetown cancelled last month because of COVID-19 in the Hoyas’ program.

In the two months since the Division I college basketball season began, about 775 games have been postponed or cancelled because of COVID-19 — more than 400 women’s games and nearly 370 men’s games. The majority of the COVID-related cancellations and postponements came in mid-to-late December.