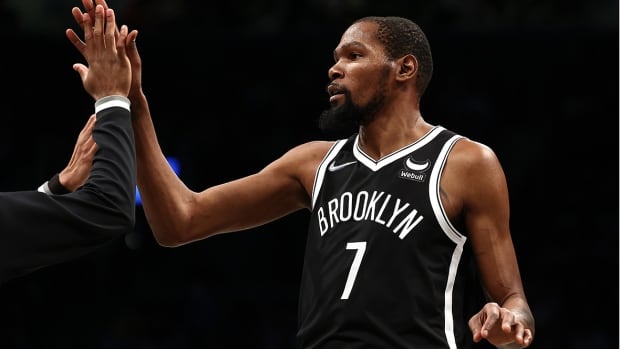 Kevin Durant has a sprained medial collateral ligament of his left knee, sidelining the NBA’s leading scorer just as the Brooklyn Nets were poised to finally have a lengthy run with their Big Three.

Durant was injured Saturday in a victory over New Orleans when teammate Bruce Brown was knocked backward and fell into his knee. Durant had an MRI exam Sunday that confirmed the injury.

The Nets said Durant was expected to return to full strength following a period of rehabilitation but didn’t provide a timetable.

Brooklyn starts a four-game road trip Monday in Cleveland to begin a stretch where it plays nine of 11 games on the road.

That would have given the Nets plenty of games with Durant, James Harden and Kyrie Irving, who is ineligible to play at home because he is not vaccinated against the coronavirus, as mandated for professional athletes playing in New York City’s public venues.

The three all-stars have played together in just two games, with the Nets winning both.

Durant is averaging 29.3 points. The Nets are a half-game behind Chicago for the best record in the Eastern Conference.