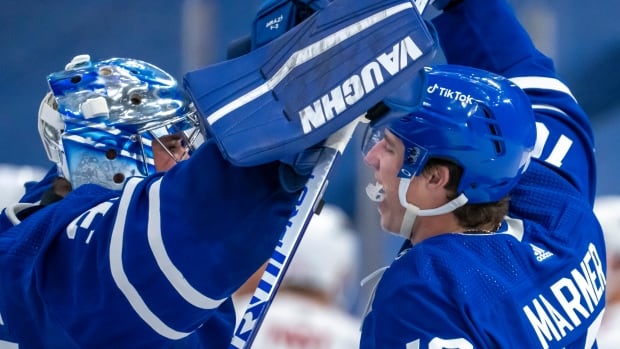 Even after his linemate Auston Matthews left the game with a suspected head injury, Mitch Marner stayed hot to score in overtime and push the Toronto Maple Leafs to their 30th win and a season-high sixth in a row on Monday.

Marner scored the tying goal with 5:48 remaining in the third period and again in the extra frame to extend his scoring streak to eight games in the 4-3 victory against the Carolina Hurricanes at Scotiabank Arena.

With 41.7 seconds remaining in the third period, Matthews got tangled up with Carolina forward Nino Niederreiter. As a result, Matthews lost his balance and crashed into the end boards.

He held his head and stayed down for a minute before he skated to the Maple Leafs dressing room without any help. He did not return.

Matthews had scored his 30th and 31st goals late in the second period to give Toronto a 2-1 lead against former Maple Leafs netminder Frederik Andersen. The two worked out last summer together in Matthews’ hometown of Scottsdale, Ariz..

Toronto head coach Sheldon Keefe did not provide an update on Matthews’ status after the game, saying the centre was still “being assessed.” Matthews was scheduled to have Tuesday off after his busy all-star weekend in Las Vegas.

The Maple Leafs don’t play again until Thursday in Calgary against the Flames.

“He’s obviously a big part of our team,” Marner said. “He does a lot for us, especially in three-on-three hockey. I didn’t really see what happened. But obviously, it’s unfortunate. I’m going to try and check on him and make sure he’s all good.

“But hopefully, all is well with him.”

All has been well for Marner, Matthews and the Maple Leafs (30-10-3). Matthews has scored six times in his last three outings, while Marner has 10 goals in eight games.

“Forecheck wise, I think that’s what has created a lot of goals for us,” Marner said.

Marner and Matthews shared the spotlight Monday with backup goalie Petr Mrazek, who made 28 stops to defeat his old team. He was terrific after Matthews tied the game in the second period with a breakaway stop on Carolina centre Sebastian Aho.

“I just tried to make myself big, stay focused and on my feet,” Mrazek said when asked if he had an advantage after seeing Aho in practice for three seasons in Carolina together.

This was Carolina’s first visit to Toronto since they embarrassed the Maple Leafs with a 6-3 win on Feb. 22, 2020, when they were pressed into using emergency backup goalie David Ayres, a local Zamboni driver.

The Hurricanes (31-10-2) arrived at the Scotiabank Arena on Monday with five wins in a row and leading the Metropolitan Division.

Carolina snatched a 1-0 lead midway through the first period on a redirect from Niederreiter. But Matthews then went to work with a power-play goal poking in a loose puck in the crease and a hard drive from the slot 3:21 later.

The Hurricanes regained the lead with a Tony DeAngelo goal eight seconds into the third period and a Derek Stepan rebound midway through the final frame in regulation.

Marner then provided his late-game heroics.

“It was a bit of a crazy game there with the lead being taken away from us and then coming back to tie the game,” he said. “I think just the work ethic and battle we had tonight is something we talked about wanting to do more of in the second half, and tonight was a good night to start that.”