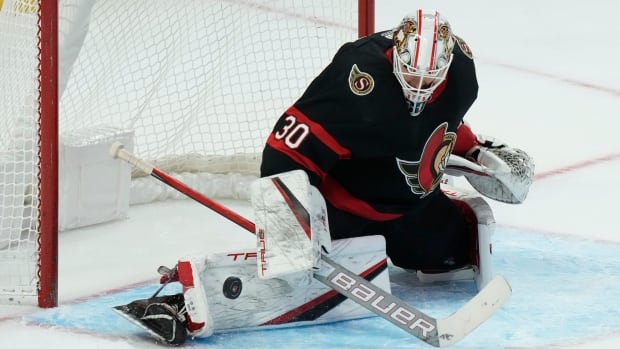 The Ottawa Senators know they weren’t at their best Monday night, but thankfully Matt Murray was.

The Senators goaltender stopped 32 shots in a 4-1 win over the New Jersey Devils where there was little doubt about who was the best player on the night.

“I think he’s the reason we won that game,” said Nick Holden, whose second period goal held up as the winner. “The first two periods, I don’t think we played very good. We gave them a lot of opportunities, but (Murray) was there to shut the door to make sure we had the lead and kept it.”

Monday’s game marked the halfway mark for the Senators and in order for them to move forward they will need more such efforts from Murray.

The week will be a busy one for the Senators with five games in seven nights. It also marked the start of a four-game homestand, although the Senators remain restricted to just 500 fans in Canadian Tire Centre.

That being said, being able to get the week off with a win was beneficial.

“To get a win in the first game, especially on the back-to-back, it’s nice,” said Holden. “I think our focus is just like I said about playing consistently. Sometimes it’s not always about wins and losses for us just because we need to make sure that we’re building that as a team. That consistent night after night after night, same game and so on. Obviously to get a win and I think for morale that helps going into tomorrow.”

The Senators host the Carolina Hurricanes Tuesday night, who lost 4-3 in overtime to Toronto, who would likely make life a little more difficult if they give up as many chances.

“We’ll have to rewatch it because I thought we turned a lot of pucks over and gave them a lot of chances, but (Murray) was there at every turn,” said Senators head coach D.J. Smith.

‘We have to score more than one goal’

The Devils didn’t play poorly, but just couldn’t capitalize on their chances and Murray made things difficult.

“[We] got off to a great start, scored on a power-play goal, didn’t give up a lot for 40 minutes,” said Devils head coach Lindy Ruff. “But we left some chances out there and I’ve said this before, we have to score more than one goal.”

Monday’s game marked the return of Brown, Dylan Gambrell and Nikita Zaitsev, who had all been sidelined by injury, while the Devils were without Jack Hughes as he was placed in COVID-19 protocol following his participation at the all-star game.

Brown, who is playing with a broken jaw, returned after missing ten games and scored midway through the third to make it 4-1.

The Devils had ten shots in the third, but just couldn’t find the back of the net.

“Nobody wants to be where we are,” said Hischier. “It’s on us. Nobody is going to do it for us. If you’re not going to dig in, it’s not going to get better.

“These little things we talk about before the games we don’t execute. These cost us goals and we just have to be harder in front of the net. We had good chances to score goals, but we (didn’t) score these dirty goals … we have to be better, it’s simply not good enough.”

With the game tied 1-1 the Devils got off to a solid start in the second, but couldn’t find a way past the Senators’ netminder.

The Senators took a two-goal lead, scoring twice in a span of nine seconds late in the period to take control.

Holden, who now has goals in back-to-back games, gave the Senators the lead as he beat Daws through traffic and seconds later Gaudette skated in off the faceoff and fired the puck blocker side to make it 3-1.

The game got off to a slow start, but it was the Devils who opened the scoring at the 11-minute mark with a power-play goal as Hischier deflected a Jesper Bratt shot.

Paul tied things up five minutes later as he took a feed in front and paused a moment to settle the puck, which seemed to throw Daws off.